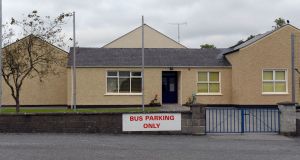 Castlerahan National School in Ballyjamesduff, Co Cavan where Alan Hawe was a deputy principal: Mr Hawe was found dead with his wife Clodagh and their children Niall (11), Ryan (6) and Liam (13) in what is being treated as a murder-suicide: Photograph: Eric Luke

Two schools have paid tributes to Alan and Clodagh Hawe, who died along with their three children on Monday in a suspected murder-suicide.

Mr Hawe was a deputy principal at Castlerahan National School in Ballyjamesduff, Co Cavan, where his sons Niall and Ryan were pupils and Liam (13) was a past pupil.

Principal Anne Foley issued a statement on Monday evening. “They were wonderful children who will be greatly missed by all who knew them.

“Alan was a valued member of our school staff and community.”

Clodagh Hawe was a teacher at Oristown National School in Kells, Co Meath. Principal Ann O’Kelly Lynch said the school was “deeply saddened” to hear of the death of their colleague .

“This is a terrible tragedy for the families, schools and the communities involved,” she said.

“We are deeply saddened by this event. Our sympathies and thoughts are with Clodagh’s family and friends.

“Clodagh was a much-loved and valued teacher in our school, and will be greatly missed by all who knew her.”

She said the school had also brought in psychologists from the NEPS to provide support.

“It was with great sadness that I heard the news today of the deaths of the five members of the Hawe family, who lived in Barconey, in the parish of Castlerahan in our diocese.

Bishop of Kilmore and Leo O’Reilly and patron of Castlerahan school offered prayers for the family. “The sudden loss of one young family, in such a shocking way, is unbearable and near impossible to comprehend . . . Especially now – as the new school year begins.

Married for 15 years, both Mr Hawe, originally from Kilkenny, and Ms Hawe, from the Cavan area, were well known in the community.

Mr Hawe was in his first year as treasurer at Castlerahan GAA club . The club on Monday night said: The family were “well-known and widely-respected within our club and community and the news has come as a dreadful shock to everyone involved in the club.”

Neighbours were in disbelief and struck “speechless” with grief at news of the tragic occurrence. One person described the family as “lovely”, and the husband as a “nice and pleasant” man.

“It is going to take a long time for the community to recover from this ,” he said.