Sinn Féin motion defeated by majority of 49 votes to 47 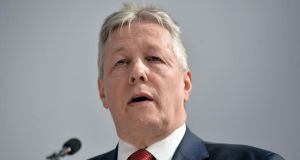 The Democratic Unionist Party had used its numbers to block the Sinn Féin motion on Monday evening through a vetoing mechanism called a petition of concern.

In the end however the petition was not required as the Sinn Féin motion was defeated by a simple majority of 49 votes to 47.

All 37 Sinn Féin and SDLP members present voted for the motion while four unionists and six Assembly members designated as “other” also voted in favour.

All DUP members and all but one of the Ulster Unionists present voted against the motion including First Minister and DUP leader Peter Robinson and Ulster Unionist Party leader Mike Nesbitt.

The only UUP member to support the motion was South Antrim Westminster candidate Danny Kinahan. Independent unionist Claire Sugden from the East Derry constituency and two MLAs associated with the NI21 party, Basil McCrea and John McCallister voted in favour.

This is the fourth time in two-and-a-half years that Sinn Féin motions on same sex marriage have been defeated. In the last vote in April last year two Alliance MLAs Judith Cochrane and Trevor Lunn voted against the motion. This time they abstained along with Alliance colleague Kieran McCarthy.

The five other members of Alliance including leader David Ford voted in favour. Steven Agnew of the Greens, who is contesting North Down in the general election, also supported the motion.

Proposing the motion Caitriona Ruane of Sinn Féin accused Ulster Unionists of “sitting on the fence as usual” and hoped that a full complement of Alliance and SDLP MLAs would vote.

“This is an equality issue,” said Ms Ruane. “I can marry my husband. I can show the world that I have married him and that I love him, but my gay and lesbian friends who have been in relationships for longer than I have - I have been in it for only 22 or 23 years - cannot do the same, and that is not fair. It is not legally right,” she added.

“We will take on discrimination and homophobia using all the tools at our disposal, but the biggest message that I want to send to drown out the negative, hateful bile that is coming out of some people is that we love our gay aunties and uncles, our lesbian children and gay grandchildren,” said Ms Ruane.

“Mr Adams said that equality is being used as a ‘Trojan Horse’ to ‘break these bastards’. When it tried to murder and bomb us into submission, the IRA did not break this community, and it will not succeed in its false equality agenda either. For that is what it is: false,” she said.

Added Ms Foster, “To the gay community, I say, I respect you. In many individual cases you are my friends and I enjoy social fellowship, but don’t allow Sinn Féin to suck you into their agenda.”

SDLP MLA Colm Eastwood said there was “no reason whatsoever why the North of Ireland should be the only place in these islands that does not have marriage available to same-sex couples”.

Mr Kinahan said that as a young person he harboured prejudices against gay people for which he was now ashamed. He added that in the British army one of his friends lost a chance of promotion because he was gay.

“I want a society here in Northern Ireland where no one is made to feel like a second-class citizen to any extent, and certainly not due to sexual definition,” said Mr Kinahan.

UUP MLA Danny Kennedy, opposing the motion, said Sinn Féin was “guilty of engaging in a highly cynical political exercise and, undoubtedly, an electoral exercise that will be of absolutely no benefit to any section of our community, least of all the LGBT community, which is being deliberately used by Sinn Féin for perceived political advantage”.