Artist expecting to hear about fate of Dublin mural 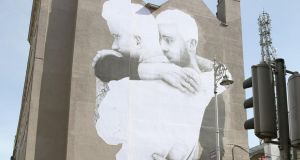 The mural by Irish artist Joe Caslin on the side of a building on Dublin’s South Great George’s Street. Photograph: Brian Lawless/PA Wire

The artist who erected a large paper mural on the side of a building in Dublin city centre expects to hear soon whether the piece will be allowed to remain in place.

Joe Caslin’s The Claddagh Embrace, which is attached like wallpaper to the side of a building near the junction of Dame Street and George’s Street shows two males hugging.

The artist said he has been advised by Dublin City Council that the artwork may have been erected in contravention of planning regulations.

“I got a warning letter from Dublin City Council last Wednesday to say that they were looking into the drawing and to see if it was erected legally or illegally,” he said. “I’m due to hear back from them in the near future”.

More than 15,000 people have signed a petition calling for the mural not to be removed. “We are asking that Dublin City Council do NOT buckle to the pressure, and allow the mural to stand high and proud on South Great George’s Street, Dublin 2,” the online petition reads.

Local councillor Mannix Flynn has said it’s purely a planning matter. “It’s the equivalent of having an ad on the building; it’s unathorised and constitutes a breach of the planning act.” he said.

Caslin said he has installed similar large scale temporary artworks on buildings in Galway, Cork and Limerick cities and has never before encountered difficulty with the local authorities.

He said the piece is similar in style to a previous project of his called Our Nation’s Sons, which looked at the potential of young men and at issues such as mental health and suicide.

Caslin said the Dublin artwork isn’t a “huge jump” from his other work. “All I’m saying is that here are two people that are in love... they are a same sex couple.”

He added that he is in favour of a Yes vote in the marriage referendum and that the timing of the piece, which he has been working on since Christmas, “didn’t just happen by accident”.

It is understood the mural prompted a number of complaints to Dublin City Council.

Caslin said he has to work with local authorities and will take on board what the council decides. “I have put them in a difficult position,” he said. “I know what I’m doing. If it is seen as illegal, that’s fine, but I know that what I’m trying to get across is correct and proper.”

A spokesman for Dublin City Council said: “Under section 152 of the Planning and Development Acts 2000-2013 a warning letter was issued advising the recipient that a complaint has been received.

“The letter is not a declaration or finding that a potential unauthorised development has taken place, simply that a complaint has been received and the development is under investigation...

“There is no requirement in a warning letter to oblige any developer to remove, amend or replace a structure, mural or any other development. However, if the developer becomes aware that the development is unauthorised, they should consider taking appropriate steps to address the offence if they wish to avoid enforcement proceedings.”