Eating processed meat can lead to bowel cancer in humans and red meat is a likely cause of the disease, the World Health Organisation (WHO) says. Video: Reuters 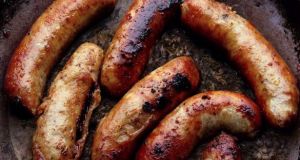 WHO said research indicates reducing your consumption of processed meats can reduce the risk of colorectal cancer.

This follows the release of its latest cancer research this week.

WHO published research on Monday that put bacon, ham and sausages in the same category of cancer risk as tobacco, asbestos, arsenic and alcohol.

The report also classified red meat – which includes beef, lamb and pork – as a “probable carcinogenic” and linked its consumption to a higher risk of pancreatic and prostate cancer.

Gregory Härtl, a spokesman for WHO, told The Irish Times the original message from the report was “misinterpreted”.

“We’re not saying stop eating processed meats altogether. Do not cut out meats completely as it has nutrients,” he said.

“But we do not want to do anything to excess. Research indicates reducing your consumption of processed meats can reduce the risk of colorectal cancer.”

WHO released the statement overnight in response a number of queries and requests for clarification following the cancer review.

Experts from the International Agency of Research on Cancer (IARC), which is part of the WHO, concluded eating 50g of processed meat daily increases the risk of colorectal cancer by 18 per cent.

Mr Härtl said it was a “shortcoming” to of the classification system that tobacco, processed meats and arsenic were in the same group.

“We do not want to compare tobacco and meat because we know that no level of tobacco is safe,” he said.

He said early next year a standing group of experts would work on giving more details on the levels of processed and red meat people within the context of an overall healthy diet.

Mr Härtl said the classification does not explain amounts and how people use the products.

“Eat healthily means eating a balances diet, too much of anything is not good,” Mr Härtl said.

The Food Safety Authority of Ireland (FSAI) said it would examine the report and issue necessary guideline changes, if necessary.

Currently, the FSAI recommends 300g of red meat a week, which is a 100g portion three days a week.

The Health Service Executive (HSE) is also to review the research to see if changes are needed to dietary and nutritional policies for patients in hospitals and other public healthcare facilities.

The Irish Farmers’ Association has said they are concerned about the impact on Ireland’s €3 billion meat industry.

Covid-19 guidelines for pregnant women to be updated