A man who has had both his eyes removed due to glaucoma has handed himself into gardai with a quantity of herbal cannabis in a protest designed to challenge the law regarding the use of the drug for medicinal purposes. Video: Darragh Bambrick 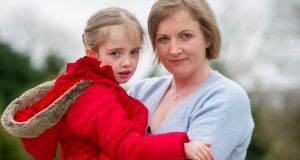 Vera Twomey with her daughter Ava, who suffers from Dravet’s Syndrome: Ms Twomey is walking to Dublin in support of the legalisation of medicinal cannabis. File photograph: Daragh McSweeney/Provision

Families seeking to treat their sick children with medicinal cannabis are being subjected to ripoffs and misleading information, the mother of the first child to be legally allowed to use the treatment has warned.

Yvonne Cahalane, whose son Tristan was given the first licence to use medicinal cannabis for a severe form of epilepsy called Dravet Syndrome last December, said many of the people contacting her were angry about the “misinformation” they had received. Some had been supplied with bogus products.

One family had bought CBD (cannabinoid) oil which turned out to be sunflower oil when tested, she said. Another paid €300 for a bottle of hemp oil with no active ingredient.

Ms Cahalane, from Dunmanway, Co Cork, warned of the risks involved in self-medicating with medicinal cannabis. Some of those who had treated their children with products purchased online or in shops had found their children suffered more, rather than fewer, seizures.

“It’s not just the dose; it’s also the interaction with existing medicines. Doctors can’t give the go-ahead if they don’t know what is going on at home.” Gauging the right level of anaesthetic to give to a child during a severe seizure can be difficult when the amount of medication taken is unknown, she pointed out.

Ms Cahalane and her son lived in Colorado for over a year to obtain treatment for his condition, but returned home after Minister for Health Simon Harris granted Tristan’s Irish consultant a licence to treat him with medicinal cannabis.

Tristan is responding well to the medication, which is sourced from continental Europe.

While a handful of further applications are being prepared, another Cork woman, Vera Twomey, is currently walking to Dublin in support of the legalisation of medicinal cannabis.

Ms Twomey claims the life of her daughter Ava, who also has Dravet’s Syndrome, is at risk because Mr Harris has not approved a licence similar to that given to Tristan Cahalane.

Ms Twomey has been unable to find the necessary consultant neurologist willing to give a clinical go-ahead for treatment with medicinal cannabis.

Neurologist Orla Hardiman described the situation regarding the supply of cannabis-based products used as medicines as “fast and loose”. While people are easily able to source such products, doctors cannot prescribe them under current laws.

If you had a life and death situation with your child and someone offered you the medicine you needed, wouldn’t you take it?”

The exception is Sativex, used to treat multiple sclerosis, but this drug is not available free as price talks with the manufacturer came to nothing.

Dr Hardiman stressed the risks resulting from “unfettered” access to cannabis products. “Just because a product is available through a particular subculture doesn’t mean it is safe”.

Another neurologist, Dr Colin Doherty, said doctors have a “solemn duty” to adhere to the highest standards when prescribing medicines, especially to children. “You can’t ask the medical profession to give up on a 100-year-old process designed to ensure products are safe.”

Medicinal cannabis products have not – yet – come through medical trials, and there is no reliable information about their safety and efficacy, he pointed out.

In Northern Ireland, another mother, Charlotte Caldwell, has returned home to Castlederg, Co Tyrone, after sourcing a supply of cannabis-based medication in the Republic for her son who has epilepsy.

Just a month ago, Ms Caldwell and her 11-year-old son Billy were renting a house in Los Angeles , where he was being treated with medicinal cannabis.

At the time, Ms Caldwell feared being unable to come home, but has since obtained medication from an Irish company that is, she understands, legal.

Although there is talk of legislative change on both sides of the Border, Ms Caldwell is keen to point out families can already access cannabis-based products. “This isn’t just available for Billy, it is available legally for children with epilepsy, those undergoing chemo and others with conditions that can be treated with cannabis-based medicine.”

She says she is perplexed at the campaign for changes to the law on cannabis instead of making use of the options currently available. “If you had a life and death situation with your child and someone offered you the medicine you needed, wouldn’t you take it?”

Billy’s medication is being supplied by GreenLight Medicines, which plans to launch its own range of cannabis-based products within weeks. The company says it will have a robust process in place to identify adverse reactions, should they occur.

The Health Products Regulatory Authority said it was aware that oils containing CBD are on sale as food supplements in Irish retail outlets. “These products are not approved as medicinal products and medicinal claims cannot be made in relation to such products and they cannot be advertised or promoted for medicinal uses.”