Up to 40,000 people have undiagnosed type 2 diabetes, charity says 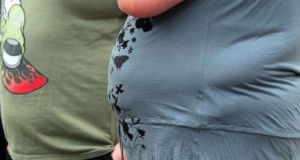 New findings published in the PLOS ONE scientific journal say up to 24,000 people in Ireland could have undiagnosed type 2 diabetes but the Diabetes Ireland charity believes the number is much higher.

Nearly 30,000 people participated in the study into diabetes risk and cardiovascular risk in Ireland between 2009 and 2013.

The research revealed that 17 per cent of participants (nearly 5,000 people) had abnormal initial fasting blood sugar levels, 1.8 per cent had undiagnosed type 2 diabetes, which develops most often in middle-aged and older people, and 10 per cent had confirmed pre-diabetes.

However, the Diabetes Ireland charity believes the number of cases of undiagnosed type 2 diabetes is as high as 40,000.

Dr Anna Clarke, health promotion and research manager with the charity, said Vhi is a private insurer and, as such, the participants in its research are likely to come from a higher socio-economic background. Type 2 diabetes tends to be more prevalent among lower socio economic groups, she said.

She said the figures published by the Vhi research were “startling” if not surprising and estimated the actual number of people with undiagnosed diabetes is probably somewhere between 30,000 and 40,000.

She said anyone who feels they may be at risk of type 2 diabetes should long on to diabetes.ie and take the online test to find out.

The risk of having undiagnosed type 2 diabetes increased by 89 per cent for every 5kg/m2 increase in weight.

“The results of our research suggest that the rate of undiagnosed type 2 diabetes and pre-diabetes is higher in Ireland than in similar European countries such as Britain and Holland,” said Vhi medical director Dr Bernadette Carr, who wrote the report.

“They also demonstrate how important it is for individuals to understand and manage their own health risks. By making some very simple lifestyle changes, people can improve their outcomes, and in the case of pre-diabetes can even delay or prevent progression to diabetes.”