Savita should have had stronger antibiotics, inquest told 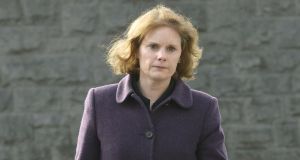 Dr Susan Knowles arriving at Galway Courthouse this morning for the inquest into the death of Savita Halappanavar. Photograph: Brenda Fitzsimons/The Irish Times

Savita Halappanavar should have been given stronger antibiotics and medical staff should have been called in earlier when her blood pressure was falling, an expert in microbiology has told her inquest.

She said it was possible Ms Halappanavar had a sub-clinical infection when she was admitted to Galway University Hospital on October 21st last because tests showed her white blood count was raised.

It wasn’t clear that her medical team were made aware of this test result.

After the membranes ruptured earlier the following day, the risk of infection grew, Dr Knowles told the inquest.

There was no clinical indication for intravenous antibiotics prior to the Wednesday. When Ms Halappanavar complained at 4.15am that morning of being cold and shivery, all her vital signs should have been checked, the witness said.

Ms Knowles said she was investigated later that morning, but an antibiotic with a broader range of cover, including E. coli, should have been administered at the time. However, the drug that was used is recommended for use in maternal cases in leading reports.

She said there was no mention in the notes of a plan to deliver Ms Halappanavar’s baby at this point, and this was a critical aspect of her care. A second opinion on the need to deliver was needed.

She said there was a delay in recognising that Ms Halappanavar was deteriorating further, and medical staff should have been called when the patient’s blood pressure was falling.

From 1pm on the Wednesday, Ms Halappanavar received a high standard of care, the witness said.