Fees for lawyers, psychiatrists, lay people at mental health tribunals up 20% since 2011 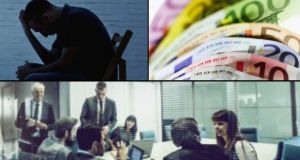 The figures show a 20% rise in tribunal-related payments, from €6.4m in 2010 to €7.7m last year. Photographs: Getty Images/The Irish Times

Lawyers, psychiatrists and lay people have been paid more than €42 million for reviewing decisions to involuntarily detain mental health patients in hospitals over the past six years, new figures show.

The amount paid for professional fees and expert reports at mental health tribunals has risen by 20 per cent since 2011 in line with a rise in the number of people involuntarily committed over the period. The number of court challenges to detentions has increased three-fold over the period.

The tribunals, which review cases of involuntary detention, are held in private and there is no public scrutiny of their work.

Even the Mental Health Commission, which has responsibility for appointing tribunals, has said it cannot review their operation or allow media access to hearings because of the legal requirement for privacy.

Mental Health Reform says the tribunals provide a “core” human rights protection by holding an external review of decisions involving the deprivation of a person’s liberty.

However, chief executive Shari McDaid said aspects of the tribunals’ operations were “problematic”. There are no published reports reviewing the work or decisions of the tribunals, so it was impossible to assess the consistency of the decisions arrived at in closed hearings, she pointed out.

There is no provision for a patient to bring an advocate or friend to a hearing, separate from legal representation, according to Dr McDaid. In many cases, patients do not see their lawyer before the actual hearing, she said.

The largest individual payment to a chairman last year was €56,890, while the best remunerated psychiatrist received €35,338. The largest payment to a lay member was €18,645 .

A tribunal comprises a legal chairman, a consultant psychiatrist and a lay person, who are engaged for a three-year period. Any person admitted to hospital against their will is entitled to have a mental health tribunal review the decision within 21 days of admission.

Almost 2,000 tribunal hearings took place last year, when less than 10 per cent of decisions were revoked.