Food & Drink Industry Ireland does not believe sugar is bad for you. ‘Over consumption is bad’

Britain will introduce a dual-band sugar tax in 2018. Several countries have already introduced such a tax with varied policies, but there is no robust evidence to show what effects these policies have on consumption and health. 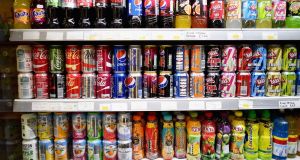 Britain has decided to impose a tax on sugary soft drinks as part of measures announced in the budget. Photograph: Getty

The Irish food industry will continue to oppose any attempts to introduce a sugar tax such as the one planned for Britain in 2018.

The Irish food and drinks industry said measures like reformulation (where soft drinks are low in sugar or contain no sugar) and reduced portion sizes will be more effective.

Food & Drink Industry Ireland (FDII) director Paul Kelly said: “We will oppose the introduction of a sugar tax. There already is a tax on these products in the form of VAT. Double taxation is not the way to go.”

The Department of Health and medical organisations have already indicated their support for the introduction of a sugar tax in a bid to tackle rising obesity levels which show that one in four Irish children are overweight.

“Each sweetened drink contains 25g of sugar which exceeds the recommended daily intake – that’s in just one drink,” she said.

“As an industry we have demonstrated that the best way to deal with this is through reformulation. We have reduced the sugar element in products. We have introduced new products that are low in sugar or contain no sugar.

We published a report earlier this year which showed a reduction of 10 calories in the daily intake of teenagers because of reformulation. The sugar intake of teens is down twice what would be achieved by a sugar tax, at no cost to the consumer. Fifty per cent of the beverage market is now low sugar or no sugar.”

Mr Kelly said sugar tax measures had failed in France, Finland and Mexico. “In France four years later consumption levels were back to 1 per cent of what they were before the sugar tax was introduced. The sugar tax doesn’t work.”

Measures to reduce sugar content and in turn the sugar intake by teenagers have already worked at no cost to the consumer, he said.

“The public already pay tax on soft drinks in the form of VAT, so we are opposed to the sugar tax. Measures like reformulation and reduced portion size will be more effective.”

This week Britain decided to introduce a sugar tax from 2018.

Prior to Budget 2016, Minister for Health Leo Varadkar sought a 20 per cent tax on sugar-sweetened drinks as a way of tackling obesity. He believed the measure would result in a 1.25 per cent reduction in obesity, or about 10,000 fewer obese adults.

However, Minister for Finance Michael Noonan ruled out a sugar tax in the October budget.

Fine Gael’s levy would raise the price of cans of sugar-sweetened drinks by 10 cent on average from 2018, yielding some €122 million in a full year.

Fianna Fáil’s proposal would increase the price of a can by six cent on average, yielding €71 million. The party also proposed to prohibit TV advertising of food high in fat, salt and sugar before 9pm.

A tax on sugary drinks has also been scrutinised in detail by the Tax Strategy Group, the body of ranking officials that prepares policy options in advance of the budget each year.