Family of Irish man in coma in Turkey appeal for help 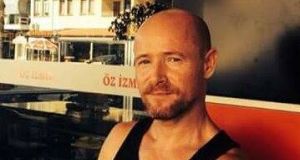 A family photograph of Limerick artist Liam McCarthy (52) prior to his falling ill while visiting friends in Turkey. Photograph: Elaine McCarthy. 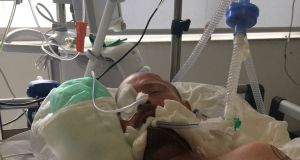 The family of a Limerick man who suffered a severe stroke while on holiday in Turkey are appealing for help in bringing him back to Ireland for medical care.

Liam McCarthy, a 52-year-old artist, was left in a coma after he suffered a massive stroke on February 28th while visiting friends in the southern port city of Fethiye.

His family said he visited a Turkish hospital for tests two weeks before his stroke after feeling dizzy and off balance. They said doctors diagnosed him with Multiple Sclerosis and prescribed medication but he suffered a massive stroke a fortnight later.

His sisters Elaine and Dee, Mr McCarthy’s twin, immediately travelled to Turkey and spent two weeks with him.

“When we first arrived in the hospital he was aware we were there,” Elaine McCarthy said over the phone. “If we talked to him he could blink and when we played music for him he cried. But that was just for two days, after that there was no response at all.”

A few days after their arrival in Turkey, the sisters were contacted by a childhood friends who works in the medical field and offered to arrange for Mr McCarthy to be treated at St James’ Hospital in Dublin.

However, Elaine McCarthy said he had since developed two infections and cannot travel until they have cleared. Mr McCarthy has transferred hospitals twice and is now in a facility in the western city of Isparta.

“He is paralysed from the eyes down. His eyes move but it’s very involuntary. He’s blind but his cognitive brain is fine so he effectively has locked-in syndrome now. When he comes out of the coma he will still have locked-in syndrome, which will be absolutely horrific,” she said.

Mr McCarthy purchased health insurance ahead of his trip but his family said the policy would not cover the cost of an air ambulance back to Ireland.

The sisters have started a gofundme page to try and raise the funds to cover the cost of Mr McCarthy’s care in Turkey and to transport him back to Ireland once he is well enough.

The family said that at the beginning of April they owed the Turkish healthcare system €10,000 and were recently informed by the hospital that the cost of his care will increase.

“They have sent us a new bill but we haven’t looked at it yet. We just need to focus on getting him back for now,” Elaine McCarthy said.

She said she had learned a lesson from the experience not to choose the cheapest option when purchasing travel insurance.

“You need to be able to have medical evacuation on your travel insurance, especially if you’re going outside Europe. People should be very aware of this,” she said.

“For me the worst thing is grieving for the loss of my brother but at the same time I don’t have the time to do that because I need to raise money. It’s been very stressful.

“We’ve been back in Ireland since St Patrick’s weekend but we keep asking ourselves should we go back out. We feel we can work better here to bring him home but the longer it goes on the more we feel we should go back.”

1 Election 2020: 10 key questions to ask candidates on your doorstep
2 Eating out in Dublin – the homeless way
3 Which jobs do teenage girls and boys aspire to have by age 30?
4 Independent TD Tommy Broughan announces retirement from Dáil
5 Election 2020: Peter Casey to stand in both Donegal and Dublin West
Real news has value SUBSCRIBE