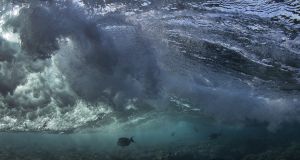 Residents expressed concern about the effect on tourism along the Wild Atlantic Way, and the noise and effect on marine life

Living on an island shaped by some of the most turbocharged waves in western Europe, what’s not to like about ocean energy ?

That was a question put to more than 150 people who attended a public meeting last week in relation to a renewable energy development proposed for the waters of Galway Bay.

For the past decade, a cardinal mark some 2.4 km southeast of An Spidéal on the north side of Galway Bay has delineated a national test site for wave energy.

The location, leased by the Marine Institute on behalf of the Sustainable Energy Authority of Ireland, is part of a network that stretches from ocean energy test tanks at University College Cork to a proposed full scale test site in Belmullet in Co Mayo.

It is also an integral part of the State’s offshore renewable energy development plan, which identifies potential resources of more than 70GW of energy in Irish waters – more than 14 times Ireland’s current energy demand. It dovetails into the Government’s “Harnessing our Ocean Wealth” strategy initiated by Taoiseach Enda Kenny and former marine minister Simon Coveney in July 2012.

The latter plan has two targets – exceeding €6.4 billion a year in turnover from our maritime sectors by 2020, and doubling their contribution to GDP to 2.4 per cent a year by 2030.

Galway Bay, a fairly recent creation in geological time and sheltered by the Aran Islands, has a particular geography which affords perfect “quarter scale” conditions to measure the wave energy generated by the Atlantic.

Since 2006, two small wave energy devices have been tested. One broke its anchor in winter storms; the other is being geared up for full scale trials off Hawaii.

Last year, a foreshore lease was secured to install a cable from An Spidéal which would provide power for a sub-sea laboratory on the site, known as SmartBay. Dubbed the “internet of things for the marine”, Smartbay houses a suite of sensors and environmental monitoring equipment and a floating “sea station”. It began a live feed of data back to shore during last month’s Seafest in Galway.

Speaking at the public meeting in the Connemara Coast Hotel in Furbo, Marine Institute chief executive Dr Peter Heffernan explained how SmartBay has “transformed” the ability of scientists to monitor the marine environment, ranging from water quality and fish health to the impact of storms and possible flooding due to climate change.

The institute is now seeking a 35-year lease under the 1933 Foreshore Act to develop the test site further, trying out up to three devices at any one time, including floating wind turbines – the latest in offshore wind technology.

However, the devices could be far bigger than anything anchored on the site until now, and residents at the meeting expressed concern about the size and visual impact, the effect on tourism along the Wild Atlantic Way, the noise and the effect on marine life.

The institute’s initial foreshore lease upgrade application sought approval for 60m-high wind turbines. It then said this was a “mistake”.

The Furbo meeting was the third such public gathering and the deadline for submissions has been extended by Minister for Local Government Simon Coveney to August 2nd. Independent TD for Galway West Catherine Connolly, who sought the extra time due to public concern, says she is “100 per cent behind renewable energy”, but such projects required community engagement.

In this case, she believes the Marine Institute has been remiss in its communication, with not all relevant documents immediately available in Irish. As a result, she said, “trust has been broken”.

The Protect Galway Bay’s Wild Atlantic Waves group, formed locally in An Spidéal and Furbo, also says it is not opposed to renewable energy, but is very concerned about the handling of the project and a lack of transparency. It claims there is a conflict of interest in that Mr Coveney, who is handling the application, is already committed to it in principle, and there is no right to appeal his decision.

It has queried why the lease application states it is for an offshore electricity generating station, when it was described as a “test site upgrade” in other literature. It is concerned about the sea area involved, the impact on protected habitats, noise, and the exact nature of some of the research at the site.

Dr Heffernan and colleagues sought to allay fears at the meeting, stressing the “offshore electricity generation station” title on the application was a technicality under existing legislation. The site “has never been, nor will it be, grid connected”, he stressed, and the institute was seeking to lease in the “exact same physical space as before”.

Noise would be less than that of “breaking waves” onshore or “measured road traffic” in the area, he said. “The conditions of any lease that might be granted would expressly forbid that the lease could be passed on or sold.”

Questions were asked about the nature of research projects planned for the site – a research call for some of them has already been advertised. There was also concern about the size of a permanent “multi-use” sea platform, and the possibility it could turn Galway Bay into an “industrial zone”.

An Taisce’s Galway branch representative Derrick Hambleton said the “cumulative impact needs to be measured and acknowledged”, referring to the nub of the problem – the absence of proper coastal zone management to facilitate a holistic approach to activity and consultation among stakeholders.

The current “frontier” approach to the marine, reflected in allocation of fishing quotas to the EU member states with greatest lobbying power, and the recent sale of the State seaweed company Arramara to a Canadian buyer for an undisclosed sum, is perceived to be anything but holistic and inclusive.

Ironically, the Marine Institute drew up some of the first working documents on a coastal zone management policy for Ireland, and has played a key role with the Geological Survey of Ireland in mapping Ireland’s seabed territory.

Peter Coyle of the Marine Renewables Industry Association, a group representing researchers and developers in the sector, says the Government is updating foreshore legislation.

“The current Foreshore Act, however cumbersome, is a strict and restrictive net . . . Secondly, the key issue in marine spatial planning in many respects is the demanding EU Habitats Directive which protects wildlife, and this is already applied with force.”

Maritime spatial planning will apply from the high water mark in Ireland’s coastal waters, territorial seas, exclusive economic zone and in designated parts of the continental shelf. Ireland’s marine area is the largest in Europe, totalling over 488,000km sq.

The State’s own Maritime Area and Foreshore (Amendment) Bill is intended to modernise the foreshore consent regime. It aims to: align the foreshore consent system with the planning system; provide a single environmental impact assessment for projects; and provide a coherent mechanism to facilitate and manage development in the Exclusive Economic Zone and on the continental shelf, such as oil and gas projects and offshore renewable energy.