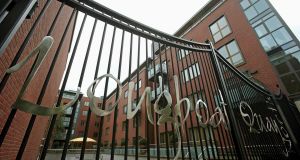 In a statement late on Tuesday, the management company at Longboat Quay said a meeting with the Dublin Docklands Development Authority had not achieved a resolution to the impasse over costs for fire safety works. File photograph: Brian Lawless/PA Wire

Representatives of residents at the Longboat Quay apartments have rejected an offer from the Dublin Docklands Development Authority of funding for fire safety works needed in the complex.

Dublin Fire Brigade last month issued a fire safety notice ordering that work, expected to cost up to €4 million, be completed at the 299 apartments built in 2006 by developer Bernard McNamara. Failure to comply with the fire notice could result in evacuation.

On Monday night, Dublin City Council chief executive Owen Keegan, also the chairman of the board of the authority, told councillors the authority would be making a “final offer” to the Longboat Quay Management Company on Tuesday to help fund the works.

The authority and the receiver to Mr McNamara’s Gendsong company last month made an offer of €2.75 million towards the work, including almost €1.25 million already spent by the authority on the installation of fire alarms. Mr Keegan said the new offer would be “substantially increased”.

However, in a statement late on Tuesday, the management company said the meeting with the authority had not achieved a resolution.

“Regrettably, today’s talks proved disappointing. No meaningful advancement was made, and no comprehensive solution was possible. Furthermore, it was unhelpful that owners and residents had to learn through media reports that we were to be made a ‘final offer’.”

The authority owns the common areas in Longboat Quay and also has an interest in 37 apartments bought under the affordable housing scheme. The receiver has control of 18 apartments in the complex.

It is understood the offer, which would have involved funding of more than €3.5 million, would have covered all the costs of the affordable housing owners and a significant portion or the remaining owners’ costs.

The proceedings in the Commercial Court were adjourned just over a week ago with the agreement of both parties to facilitate efforts to resolve matters.

“As we have stated from the outset, we are focused on getting a comprehensive solution to the distressing situation which we find ourselves in,” the management company statement said.

“We took the decision to adjourn legal proceedings against the DDDA and Dublin City Council so that all sides could engage to find such a solution,” it added.

“ We remain open to engagement at all times, but will also go to the Commercial Court on Monday to ask the court to accept this case in the commercial list. As this matter is subject to legal proceedings, we are unable to comment further at this time.”

The docklands authority declined to comment on Tuesday night.