We need to reduce our dependence on fossil fuels now, says the Intergovernmental Panel on Climate Change 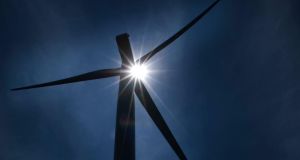 Cutting emissions from electricity production to near zero would involve widespread switching from fossil fuels to renewables such as solar and wind energy. Photographer: Norm Betts/Bloomberg

The latest volume of the Intergovernmental Panel on Climate Change’s (IPCC) Fifth Assessment Report is a “final wake-up call” to the world, as former president Mary Robinson said yesterday, not least because it tells us that efforts to cut carbon emissions have fallen well short of what is needed.

If we continue with “business as usual”, not only will there be no chance of capping the rise in average global temperatures at 2 degrees, but temperatures may increase by 3.7 to 4.8 degrees, which would fundamentally change life on Earth. “Therefore, we must heed the science and take urgent action,” Ms Robinson said. “Every one of us has a responsibility to act.”


Sustainable development
“A global framework for sustainable development that acknowledges the impact of climate change and an international climate agreement that is fair and legally-binding [due to be concluded in Paris at the end of next year] are required to keep our people and planet safe,” she said.

According to IPCC working group co-chairman Ottmar Edenhofer, “climate policies in line with the 2 degrees celsius goal need to aim for substantial emission reductions”; the “clear message from science” is that we can’t continue with a business-as-usual scenario.

“Many different pathways lead to a future within the boundaries set by the 2 degrees Celsius goal. All of these require substantial investments. Avoiding further delays in mitigation and making use of a broad variety of technologies can limit the associated costs.”

To have a chance of achieving the target “means lowering global greenhouse gas emissions by 40 to 70 per cent (compared with 2010) by mid-century and to near-zero by the end of this century”.

The working group’s report on mitigating climate change shows that “only major institutional and technological change will give a better than even chance that global warming will not exceed the 2-degree threshold”. And this will involve transforming our energy system.

Having analysed 1,200 scenarios from the scientific papers on climate change, the report’s 235 authors, 180 expert contributors and 38 review editors from 57 countries, concluded that even less ambitious temperature goals would still require major cuts.

Since the IPCC’s last assessment report, published in 2007, a wealth of new knowledge about climate change mitigation has emerged as evidenced by the fact that the working group’s 16-chapter report includes about 10,000 references to scientific literature.

The latest report concludes that stabilising greenhouse gas concentrations in the atmosphere requires emissions reductions from energy production and use, transport, buildings, industry, land use and human settlements – in effect, the way we build cities.

Zero emissions
Cutting emissions from electricity production to near zero would involve widespread switching from fossil fuels to renewables such as solar and wind energy. Slowing deforestation and planting more forests as “carbon sinks” would help to reduce emissions.

“Through afforestation, land could be used to draw carbon dioxide from the atmosphere,” the report says.

This could also be achieved by combining electricity production from biomass or fossil fuels using carbon capture and storage, an unproven technology.

But as the UN talks have shown, achieving such co-operation is “a challenge in itself”.