Indonesia loses forests as big as Ireland over 12 years 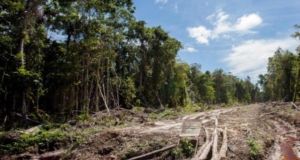 Indonesia’s losses of virgin forests totalled 60,000 sqkms between 2000 and 2012, partly to make way for palm oil plantations and other farms, a study said. Photograph: Getty

Indonesia has for the first time surpassed Brazil in clearing tropical forests and losses are accelerating despite a 2011 moratorium meant to protect wildlife and combat climate change, scientists have said .

Indonesia’s losses of virgin forests totalled 60,000 sqkms - an area almost as big as Ireland - from 2000-12, partly to make way for palm oil plantations and other farms, a study said.

And the pace of losses has increased.

“By 2012, annual primary forest loss in Indonesia was estimated to be higher than in Brazil,” where clearance of the Amazon basin has usually accounted for the biggest losses, the scientists wrote in the journal Nature Climate Change.

Deforestation in Indonesia in 2012 alone was 8,400 sq kms versus 4,600 sq kms in Brazil, which has managed to reduce losses in recent years, it said.

“We need to increase the law enforcement, the control in the area itself,” said Belinda Margono, lead author of the study at the University of Maryland and who also works as an official at the Indonesian forestry ministry.

“The rainforests are the lungs of the planet. You have lungs to breathe and if you get rid of the lungs, the planet’s going to suffer,” said Matthew Hansen, a co-author of the report at the University of Maryland.

Indonesia imposed a moratorium on forest clearance in 2011, partly to slow losses that are ruining habitats of orangutans, Sumatran tigers and other wildlife. Norway has also promised $1 billion to Jakarta if it slows forest losses.

“It seems that the moratorium has not had its intended effect,” the scientists wrote.

Trees absorb carbon dioxide, the main greenhouse gas blamed for causing global warming, as they grow and release it when they are burnt or rot. By UN estimates, deforestation may accounts for 17 per cent of all man-made greenhouse gases.

Other studies have also found large forests losses in Indonesia but the report’s findings focus only on the most important virgin forests, excluding plantations that can re-grow quickly.

Norway, whose $1 billion pledge is part of a plan to slow climate change around the world, said the findings strengthened reasons for the programme.

Oslo wants conservation to be economically attractive to landowners, rather than logging.

She said forest losses in Indonesia may increase in coming months, with drought raising risks of fires.

So far, Norway has paid almost $50 million to Indonesia to help set up new institutions to reduce deforestation, she said. Indonesia will only start to get large amounts of money if monitoring proves a slowdown in deforestation.

Norway, rich from North Sea oil and the most generous donor for preserving tropical forests, has a similar $1 billion project with Brazil and other smaller programmes with nations including Guyana and Tanzania.