Ikea buys windfarm to power stores in Dublin and Belfast

Firm is planning to invest €1.5 billion in clean energy projects by 2020 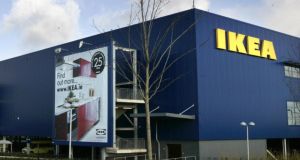 The Ikea outlet in Ballymun, Dublin, which is shortly to be powered by a windfarm.

Flatpack giant Ikea is buying a wind farm to power its outlets in Belfast and Dublin.

The Swedish retailer said four large turbines in Carrickeeny, in north west Leitrim, will go into operation next year.

They will generate 25GWh of electricity - the same as would be needed to power 5,500 houses a year.

Joanna Yarrow, of Ikea, said the move would help cut costs, as well as reduce its carbon footprint.

“Companies, individuals or governments; we all have responsibility to address the resource dilemma and commit to a more sustainable future,” she said.

“Producing our own affordable, renewable electricity gets us one step closer to becoming completely energy-independent by 2020, while ensuring our commercial success.”

Last year, Ikea unveiled its plan to be 100 per cent clean energy-fuelled by 2020.

The sustainability project will see it invest €1.5 billion into wind and solar energy sources.

Ikea has two outlets in Ireland: one near Belfast’s George Best City Airport and the other in Dublin’s Ballymun.

The wind farms in Leitrim will power the stores for the next two decades, the company said.

The world’s biggest furniture retailer said it was one of the first corporate businesses in Ireland to operate a wind farm in this way.

Electricity generated by the turbines will be sold to energy supplier Vayu, which will power the Dublin and Belfast stores under a 15-year contract.