Family at odds over future of Lambay Island

Some claim castle being overhauled for commercial reasons 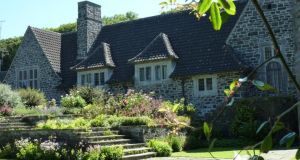 A row has broken out among the extended Baring family over plans to upgrade Lambay Castle and other buildings – designed or remodelled by renowned English architect Sir Edwin Lutyens – on Lambay Island off the Co Dublin coast.

The Lambay Estate Company – effectively controlled by Alex Baring, the 7th Baron Revelstoke – has sought planning permission to upgrade the castle and several outbuildings “to restore, as far as practical, the original pattern of usage”.

But one of Lord Revelstoke’s cousins, Beatrice Kelly, and her husband Niall McManus have objected to the scheme, claiming that it was for “commercial rather than family use” of the complex of buildings on the island, which has hitherto been kept private.

Their letter of objection to Fingal County Council starts with a declaration of interest in which Ms Kelly and Mr McManus point out that they are both beneficiaries of the Revelstoke Settlement, which was set up by the 4th baron, Rupert Baring, in the 1980s.

Lambay, the largest island off the east coast, was acquired by the Baring family in 1904. Afterwards, the 3rd baron, banker Cecil Baring, commissioned Lutyens to convert and extend Lambay Castle; the architect was later godfather to his son Rupert.

Lutyens made the original medieval castle habitable by creating a courtyard of buildings containing extra bedrooms and other rooms, with grey pantile roofs sweeping down almost to the ground and an enclosing curtain wall, including a bastioned gateway.

As Ms Kelly and Mr McManus note in their letter, Lambay Castle “is regarded as one of the most important houses in Ireland as well as one of Lutyens’ finest works” – although his Irish National War Memorial at Islandbridge, Dublin, is better known.

Lambay Castle and many of its outbuildings are protected structures in the Fingal county plan. The island is also a designated nature conservation area, with the largest concentration of seabirds in Ireland, including cormorant, gannet, kittiwake and puffin.

In their detailed submission to Fingal County Council, Friel Architects stress that “all proposed building work is exclusively within existing buildings; no new buildings are proposed and strenuous efforts have been made to limit irreversible interventions”.

They say the works are needed to “ensure the future of Lambay by returning it to its full potential as a home, a working estate and as a national asset”, adding that the current level of income generated by the estate is “simply inadequate” to maintain it.

The works include a replacement wind turbine, new reservoir and sewage treatment plant as well as a new heating system and more bathrooms in the castle and outbuildings; at present, the architects say, there is “one serviceable WC” in the castle.

“Electrical storage is limited and only able to provide essential lighting, communication, refrigeration and a single island washing machine; there are no microwaves, toasters, food-processors, hair-dryers, irons, tumble-dryers or dishwashers on Lambay.

“It is the desire of the Lambay Estate Company to address all of the deficiencies identified in the accommodation and infrastructure of the island and to do so in a way which entirely respects the architecture and feel of the grounds, buildings and interiors.”

However Ms Kelly and Mr McManus maintain that the proposed works “do not demonstrate that they take into account or can provide for the known conservation needs of the building stock on the island” and the intention is “commercial rather than family use”.

They said the trustees of the Revelstoke Trust told them by letter last April that its cash assets “are being depleted to maintain the status quo” and it was the trustees’ opinion that a “hospitality structure” would generate income to conserve the island.

Their letter points out that Ms Kelly – a grandniece of Rupert Baring – and Mr McManus had both provided their expertise in areas of heritage and renewable energy on Lambay; she was involved in an archaeological survey and he advised on energy.

They say any opening up of Lambay for tourism would constitute a change of use of the castle and its outbuildings and note that no business plan for “the commercial operation” was included in the Lambay Estate Company’s planning application.