New line scheduled to open in 2017 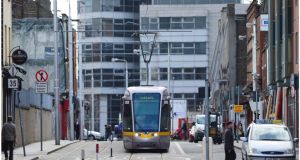 The Dublin cross-city line, due for completion in 2017, will connect the existing Green and Red lines through the city centre before continuing north to the new DIT campus planned for Grangegorman, then on to Phibsboro and Cabra, where it will terminate at the Iarnród Éireann station at Broombridge.

The line, due for completion in 2017, will connect the existing Green and Red lines through the city centre before continuing north to the new DIT campus planned for Grangegorman, then on to Phibsboro and Cabra, where it will terminate at the Iarnród Éireann station at Broombridge.

Minister for Transport Leo Varadkar last November said the EU bank had agreed in principle to advance €163 million for the project. While the loan, signed off by the bank’s vice-president for Ireland, Jonathan Taylor, yesterday, was €13 million short, it represented “the best deal available”, Mr Varadkar said.

“This substantial loan from the EIB will deliver significant savings on exchequer borrowing costs over the next couple of years, with an interest rate better than we would have got on the capital markets from other banks.”

Interest rate
He was not free to reveal the interest rate struck with the bank but it was “a lower rate than we would get anywhere else”.

He said the new line would add 10 million journeys a year to the Luas system, would take about three million car trips off the road, create 60 new jobs when up and running, and 800 jobs during construction.

Work on the line began last June with the identification and filling in of some 300 cellars in the city centre along the route.

The current phase of work involves moving gas, electricity and water pipes out of the way of the tram line, and has resulted in traffic diversions and some disruption along the route.

Five consortiums have been shortlisted to compete for the contract, which is due to be awarded by the end of this year, with work to begin early next year and to be completed by autumn 2016.

The final phase of the project involves the installation of overhead cables, signal controls and other electrical and mechanical systems ahead of the 2017 opening of the line.

The Railway Procurement Agency has permission to build 13 stops along the line. Plans for a 14th stop, northbound on Dawson Street, will be lodged with An Bord Pleanála over the coming weeks.

1 Explainer: Did the Taoiseach ignore public health rules by going on a picnic?
2 Miriam Lord: Leo’s Phoenix pecs just a storm in a bag of cans
3 Dig for remains of Red Hugh O’Donnell finds skull and coffins
4 ‘I will be alone for rest of my life,’ says woman raped as she slept
5 Leaving Cert: Teachers advised to ‘destroy’ documents relating to students’ grades
Real news has value SUBSCRIBE