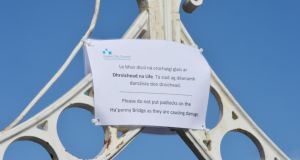 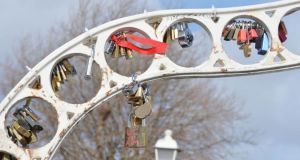 An appeal for couples not to lock their love to Dublin’s historic Ha’penny Bridge, has been made by the council.

Dublin City Council has today erected six signs on the pedestrian Liffey crossing, urging people not to place locks on the structure because it is being damaged.

“Please do not put padlocks on the bridge as they are causing damage” the typed and laminated notices in both Irish and English, reads.

The temporary signs are attached to the metal arch ribs across the 3m wide bridge.

The council has removed some 300kg of locks from the bridge in the past year, a spokeswoman said.Contractors have been removing these on a regular basis using cutting equipment, she said.

The idea behind the signs is to create awareness of the damage and to reduce the number of locks being attached.

The council also has health and safety concerns due to falling locks and locks being attached to electric cables.

The idea behind love locks is that the names or initials of couples are either written on or engraved into a padlock which is then attached to a structure and the key thrown away.

The phenomenon has taken hold in many part of the world , including the Pont des Arts bridge in Paris .

Since 2011 padlocks have been appearing on the Ha’penny Bridge and while Dublin City Council has continued to remove them, couples continue to attach them.

The 43m long bridge was extensively refurbished by Dublin City Council in 2001. The elliptical arch bridge is almost 200 years old, having first opened in May 1816, allowing people to pay half a penny to cross over its timber gangway. (this was the price of the ferry which was retired). Now an average of 30,000 people cross the bridge each day.

It was the first pedestrian bridge across the Liffey and its official name since 1922 is the Liffey Bridge.