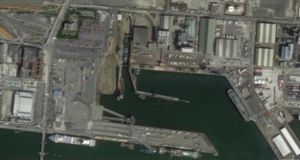 A Bord Pleanála hearing into a €200 million plan to redevelop the Alexandra Basin in Dublin’s docks is under way.

Some 26 workers face losing their jobs as a result of a €200 million plan by the Dublin Port Company to redevelop the Alexandra Basin to accommodate bigger cruise ships, a planning hearing has heard.

Half a dozen shipping workers today protested outside the hearing by An Bord Pleanála in Dublin city centre. The services they provide include ship repair, maintenance, and marine mechanical and electrical engineering.

Joe Nelson, company secretary of Dublin Graving Docks Ltd, said the company was not against cruise ships but was against the configuration and the scale of the proposal.

The reason given for the closure of the dry dock area where the company was based was the financial yield per acre of land to Dublin Port, he said.

Mr Ajamil had said the port would “go the way of the dinosaur” if it did not reconfigure to accommodate ships over 330m long.

But Mr Nelson said the consultants and the port company had given no specific answer to the question of what the revenue would be from the reconfigured Alexandra Basin area.

He said Dublin Graving Docks had had a very good working relationship with the Dublin Port Company and he hoped this would continue and that it would not be shut down completely.

Dublin Port Company secretary Michael Sheary told the hearing that if planning permission was granted by An Bord Pleanála, the company would pay a sum of €1 million towards facilities in the Bull Island area as part of a “community gain” initiative.

It would transfer its ownership of a portion of Bull Island to Dublin City Council to hold in perpetuity for the people of Dublin.

In addition, it would allocate €200,000 towards the cost of studies by the council, including a feasibility study for a proposed international visitor centre and a management plan or masterplan for Bull Island.

Conservation engineer Christopher Southgate, in evidence for the port company, told the hearing the challenge in the redevelopment plan was to “manage change in such a way that allows the retention of character and special interest, a primary aspiration of good heritage conservation”.

“In this case the strategic importance of the port and its capacity to continue to fulfil its role must be balanced against the demolition of a section of the North Wall extension, a structure of some significance.”

He said the proposed retention and conservation of granite slabs and mooring rings within a “modified, modern retaining structure” was significant and was introduced to “balance the loss of 19th century workmanship”. It would illustrate an approach by the port company that “appears cognisant of the historical value of the protected structure”.

The planning hearing began on Wednesday and is continuing.