“The absence of appropriate cycle parking facilities [in Dublin] has been shown to deter people from cycling in the first place,” a report by Halcrow Barry consulting engineers stated. File photograph: Cyril Byrne/The Irish Times

Some €10 million needs to be spent to provide high density, secure bicycle parking in Dublin city centre, according to a report commissioned by the National Transport Authority and Dublin City Council.

About 14,500 cyclists travel to work, school or college in the city.

This would require an increase in public parking spaces from a current capacity of some 4,625, to 16,245.

However, while almost all the existing spaces are on-street, secure off-street parking would be required to encourage commuters to switch to bicycles, according to the report by Halcrow Barry consulting engineers. 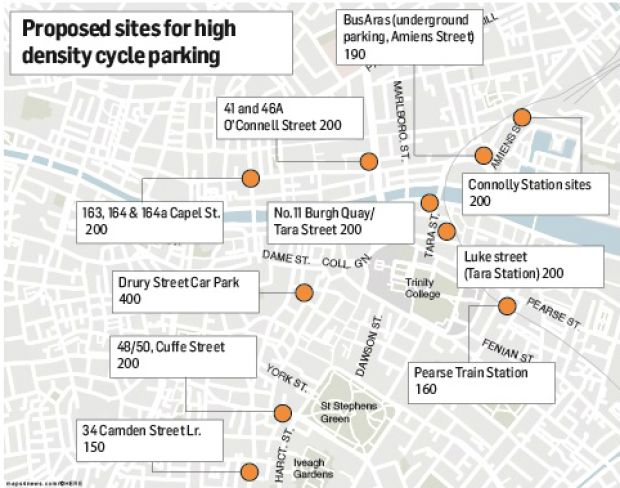 Of the 16,000-plus spaces required, about 3,000 need to be in secure off-street premises, the report says. While the cost of an on-street stand is typically €350, off-street facilities cost about €2,500 per space. When the additional costs of security and management of the facilities is taken into account, the cost would be approximately €10 million, or €620,000 a year.

The report defines “high density” facilities as those with the capacity to hold between 100 and 200 bicycles. It has identified 10 sites in the city with the potential to cater for more than 2,100 bicycles, some of which could be expanded to cater for more.

The sites have been selected for their proximity to transport or shopping areas. The city’s first indoor cyclepark, the Drury Street Car Park, already has 196 spaces, but through more efficient usage of space and moving into the basement this could be expanded to 400 spaces.

Busaras currently provides underground cycle spaces for employees but up to 190 public spaces could be provided, possibly on a subscription membership basis. At nearby Connolly Station, three vacant sites could provide at least 200 spaces.

Around Tara Street Dart station, a large vacant site on Burgh Quay could provide more than 200 spaces, while another site nearby at Luke Street could accommodate another 200 bicycles.

Two potential locations have been identified at Pearse Station, with capacity for 190 bicycles.

A vacant site on Capel Street, identified in the report as a “high demand” off-street cycle parking area, could hold 200 bicycles.

A similar number could be accommodated on the site of the former Chartered Land development on O’Connell Street. This site has planning permission for a shopping centre.

A site on Cuffe Street, within a few minutes’ walk of the St Stephen’s Green Luas stop, also has potential for 200 spaces, while a vacant site on Camden Street could hold 150.

The report recommends trialling pay-by-use lockers in Drury Street, but says any parking revenues would be low. “It is recommended that cycle parking in the city is largely provided free of charge, with only limited charging applied for additional facilities.”

Toilets in 22 public buildings to be made available in Dublin

Ireland ‘tired of being considered laggards’ on climate action – Ryan

Covid-19: One further death and 434 new cases reported by Nphet

2 ‘An independent spirit of mind’: the march towards Welsh independence

4 Covid-19: One further death and 434 new cases reported by Nphet

5 Cummings lashes out at Boris Johnson over leak allegations