Teaching culturally diverse children is a challenge for Irish schools

Opinion: Changing the profile and training of our teachers is vital to avoid the alienation and underachievement of ethnic minorities 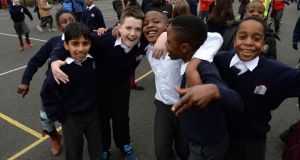 Ireland’s emergent transformation from a traditional homogenous society to a nation of new immigrants means that the country’s teachers are on the front line of educating a more diverse student population.

For 25 years, my research has focused on the role of culture and cultural context in education. The most recent manifestation of this work is the Centre for Culturally Responsive Evaluation and Assessment at the University of Illinois at Urbana- Champaign.

This year the centre was joined in its work by its sibling in the school of education studies at Dublin City University. The focus at both is on creating the strategies and tools that enable all children to fully benefit from their schooling.

Based on my research and evaluation work in the US, I would suggest that there are a number of issues that require Ireland’s careful and immediate attention if the country is serious about avoiding the all-too-common alienation and underachievement experienced by ethnic minorities elsewhere.

A primary concern is the diversity and training of the Irish teaching force. In my many visits to Irish schools, I am always struck by the commitment of the staff, but also by their homogeneity, even when there is a highly diverse student population.

Teachers are guides and role models for their students, so it is imperative that the teaching force reflects the diversity of the student population. This requires an intentional effort to increase the diversity of those who are being trained to be teachers, which in turn would require establishing recruitment, admissions and retention strategies specifically designed to achieve that goal.

An equally important consideration is effective training of new teachers for this diverse student population and comparable professional development opportunities for current teachers. This training for new and current teachers must include instructional strategies and techniques that are culturally responsive in order to more effectively meet the educational needs of students from diverse cultural backgrounds.

There is one common characteristic of teachers who are successful in teaching traditionally under-served and disenfranchised students. They understand and appreciate the cultural backgrounds of their students, know how to build on the cultural strengths that students bring to school, and also know how to solve problems that stand in the way of effective education.

The education of immigrant and culturally diverse students is a global challenge. Excuses for ineffective pedagogy that complement failure is unacceptable. There are also increasing concern about segregation and the educational assessment of students. I am not surprised about the increasing patterns of certain new immigrant students being more heavily concentrated in particular schools. However, there is a distinct risk that this will result in practices that make it possible for schools to limit the admission of students of colour, and such practices must be challenged.

I am also concerned about current plans to expand the use of standardised achievement tests. My work over the years has argued that issues of culture and cultural context are not thoroughly considered in the test development process. Specifically, I have argued that these tests and their test items must be rigorously scrutinised to minimise the potential for bias, so that they more accurately assess what all students have learned as a result of education.

Even though we have been encouraged by the technical refinements being made to existing instruments and the potential of new ones, the same disparities in performance based on race, poverty and language have persisted.

In Ireland, the language diversity of its student population will very likely require intensive language support for parents and children with English as their second language. I understand that funding for such efforts has declined in recent years, which may have negative consequences in the not-too distant future.

There are also issues to be considered regarding what is taught in Irish schools. There remains a continued and challenging discussion in the US as to what extent the culture and experience of minority groups should be included in the curriculum, as well as how this would be done. This is also a question likely to come on to the Irish educational agenda in the not-too- distant future.

In a striking metaphor, the late American poet Adrienne Rich compared education to a mirror, asking what happens “when someone with the authority of the teacher describes our society and you are not in it?” Such an experience, she said, can be disorienting: “A moment of psychic disequilibrium as if you looked into a mirror and saw nothing.”

There are myriad challenges that must be addressed by the Irish education system. I am encouraged to believe that it will do so.