Female held for questioning after drugs worth €30,000 and weapon discovered in Cork 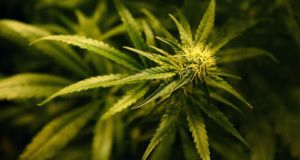 Officers from the Blackrock District Drugs Squad found 1.5kg of cannabis herb and a handgun at a house at Castle Meadows in Mahon at about 9.30pm last night.

Gardaí in Cork are continuing to question a 26-year-old woman following the seizure of €30,000 worth of drugs and a firearm during a search of a house in the city.

Officers from the Blackrock District Drugs Squad found 1.5kg of cannabis herb and a handgun at a house at Castle Meadows in Mahon at about 9.30pm last night.

Gardaí arrested the Irish woman following the seizure and she was brought to the Bridewell Garda station in Cork for questioning.

She was arrested under the Criminal Justice (Drug Trafficking) Act 1996 which allows gardaí to detain suspects for up to seven days before they must be released or charged.

The handgun has been sent to Dublin for examination by ballistics experts to see whether it has been used in the commissioning of any offence.

1 ‘Everyone still thinks it’s a joke’ - parents of toddler with coronavirus speak out
2 ‘It’s Sinn Féin against the rest’: NI Executive in conflict over coronavirus
3 Coronavirus in Ireland: New powers of arrest for gardaí expected to come into force
4 Coronavirus: At least 750 home carers to be redeployed to nursing homes
5 Ireland’s pharma industry gears up to make key ingredient for Covid-19 testing
Real news has value SUBSCRIBE