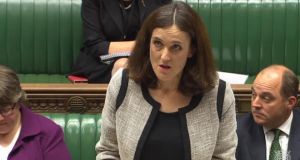 The Northern Secretary Theresa Villiers has indicated that there could be a role for a body similar to the Independent Monitoring Commission and also for the British National Crime Agency in determining the status of the IRA and other paramilitary groups.

Ms Villiers, when briefing the House of Commons on the current Stormont crisis today, made no specific commitments about a new monitoring commission but said “serious consideration” needed to be given to such a body.

On Monday DUP leader Peter Robinson said he would listen to her House of Commons speech before deciding whether to participate in round-table talks to resolve the two key issues of the fallout from the murder of Belfast republican, Kevin McGuigan, and the deadlock over welfare reform.

In his initial response through a tweet Mr Robinson described her remarks as a “holding statement” and added that it “delays start of talks”. He indicated he is expecting some further elaboration from Ms Villiers.

“Heard SoS’s holding statement & commitment ‘in the coming days’ to respond to concerns. This delays start of Talks. We await her response,” he wrote.

Ms Villiers told MPs this afternoon that “serious consideration needs to be given to whether the time is right to re-establish a body along the lines of the Independent Monitoring Commission”.

“The remit the parties might wish to give to such a body is likely to be different from those addressed by the original IMC, reflecting changed circumstances,” she said.

“But there might well be scope for such a body to play a part in providing greater community confidence and repairing working relationships within the Executive,” she added.

Ms Villiers also appeared to indicate a potential role for the National Crime Agency and also for similar agencies in the South in tackling various forms of crime involving current or former paramilitaries.

“The government will also actively consider whether there is more that we can do to support efforts to tackle organised crime and cross Border crime in Northern Ireland. In the days to come, we will continue to listen carefully to representations made to us on the best way to ensure all parties can engage in the process,” said the Northern Secretary.

The British and Irish governments are now awaiting a response from the Northern parties and in particular from Mr Robinson to her statement to assess whether plenary negotiations can begin this week or next week. To that end Ms Villiers and the Minister for Foreign Affairs Charlie Flanagan are due to engage in further bilateral and trilateral meetings with the parties at Stormont House on Wednesday.

Dublin and London will now await a more detailed response from the DUP and Mr Robinson who last week stood aside as First Minister following the arrests of three senior republicans including Sinn Fein Northern chairman Bobby Storey in connection with last month’s murder of Mr McGuigan - viewed as a revenge attack for the murder in May of another senior Belfast republican Gerard Jock Davison. Mr Storey and two other republicans, Brian Gillen and Eddie Copeland were released unconditionally.

Ms Villiers said in the House of Commons that the “situation is very grave” as a result of the reaction to the arrests and to the PSNI chief constable George Hamilton’s that the IRA still exists and that some of its members were involved in Mr McGuigan’s murder, although without the authority of the IRA leadership.

She said that as a result of Mr Robinson standing aside and the resignation of all but one of the remaining DUP Ministers that “a number of departments are left without ministerial leadership and relationships between the parties have almost completely broken down”.

Ms Villiers also referred to how vital it was to resolve the welfare reform impasse that in a matter of weeks could leave the Northern Executive financially unsustainable.

“Without welfare reform and steps to tackle in-year budget pressures, there is a real danger that Executive departments could start running out of money, becoming steadily less able to pay their bills, with the serious negative impact that could have on front line public services,” she said.

Sinn Féin MLA Conor Murphy today repeated the comments of Sinn Féin Deputy First Minister Martin McGuinness that there “should be no delays or preconditions in beginning all-party talks to resolve the current difficulties facing the Executive”.

“If a resolution cannot be found then the next step will be to go to the polls and call a fresh election,” said Mr Murphy.