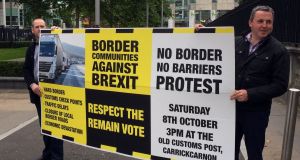 Campaigners from a group called Border Communities Against Brexit outside Belfast’s High Court where a legal challenge to Brexit is taking place. Photograph: Michael McHugh/PA Wire

The British prime minister Theresa May acted legally and democratically in announcing that she will take the United Kingdom out of the European Union, a lawyer for the British government has told the Belfast High Court.

The court also heard from the North’s Attorney General John Larkin, QC, who said Brexit would not affect one “comma, full stop, word or phrase” in the Belfast Agreement and related legislation.

Tony McGleenan, QC, who is representing the Northern Secretary James Brokenshire, defended the right of the British government to fully implement the referendum vote in favour of the UK quitting the European Union.

Mr McGleenan rejected claims by lawyers acting for groups opposing Brexit who said that in relation to Northern Ireland, which voted 56 per cent to stay in Europe, that Ms May had no legal authority to implement last June’s Brexit referendum vote.

During the judicial review in front of Mr Justice Maguire, lawyers for victims’ group campaigner Raymond McCord and for a group of politicians and human rights bodies contended that Ms May had no legal authority to trigger Article 50 by the end of next March to begin the process of the UK leaving the EU.

A number of points were put to the judge by lawyers for anti-Brexit groups on Tuesday, including the argument that taking Northern Ireland out of the EU would breach the principle of consent in the 1998 Belfast Agreement.

It was also argued that it was a matter for the Westminster parliament and not just the British government to trigger Article 50. It was further stated that withdrawal could be “catastrophic for the peace process”.

Mr McGleenan however insisted that the British government properly exercised its ministerial “prerogative power” in deciding that the referendum result should be implemented. He said that the UK “joined the EU by the use of the prerogative power and can withdraw from the EU by using the same power”.

Mr McGleenan said there was “no legal impediment to the process of giving effect to the will of the people”. It was not “illegitimate, unorthodox or undemocratic” for the British government to use its prerogative to implement Brexit, he added. In politics it was “common currency”, he said.

Leaving the EU “will have no impact on the peace process” and the British government “remains committed” to the process, he argued.

Mr Larkin, representing the Northern Executive, said there was nothing in the Belfast Agreement “that possibly could be interpreted” as an agreement to stay in the European Union.

“There are no substantive obligations in the Belfast Agreement which requires continued membership of the European Union,” he added.

“Not one full stop, not one comma of the Northern Ireland Act 1998 has been affected. Not one word or phrase in the Belfast Agreement or the British-Irish Agreement, at least, in its operative parts, has been affected,” said Mr Larkin.

Mr Lavery said it also was possible the British government “could ignore the Belfast Agreement...by imposing a united Ireland” or that it could override the agreement to “scrap” the nationalist aspiration for a united Ireland.

Among those also participating in the judicial review are Sinn Féin, SDLP, Alliance and Green politicians as well as the Committee on the Administration of Justice (CAJ) and the Human Rights Consortium. The consortium’s director Kevin Hanratty said his organisation did not take a position on whether the UK should remain in or leave the EU during the referendum process.

“Essentially we are deeply concerned that the multitude of human rights and equality protections that people in Northern Ireland currently have access to by virtue of the UK’s membership of the EU will be lost,” he said.

Outside the High Court, a group of protesters, Border Communities Against Brexit, demonstrated, calling for the fact that a majority of voters in Northern Ireland voted remain “be respected”.

1 All students will not return to school even if social distancing rules are relaxed – McHugh
2 Miriam Lord: Taoiseach is trapped in a Zoom session from hell
3 Coronavirus: Further 9 deaths reported along with 46 new cases
4 Emily Maitlis thanks BBC viewers for support after Cummings row
5 Brazilian gang held in Offaly had sub-machine gun and student visas
Real news has value SUBSCRIBE