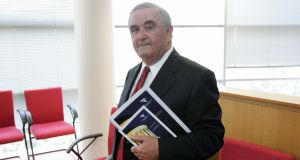 Retired chief justice John Murray has been appointed by the Government to review legislation allowing access to journalists’ phone records.

The Cabinet had earlier agreed to appoint an independent expert to examine the legislation.

It is understood Mr Justice Murray will be tasked with reviewing international practice and law to assess if Ireland’s legislation is out of sync with other countries.

Mr Justice Murray will be asked to assess if any legislative change is required.

Minister for Justice Frances Fitzgerald brought a memo to Cabinet on Tuesday on a planned review of GSOC powers and how it may be carried out.

Earlier, former press ombudsman John Horgan said investigating officers should be required to seek prior approval from a judge or senior legal figure before they can access journalists’phone records.

Speaking on RTÉ’s Morning Ireland, Mr Horgan said the power to access phone records was given to GSOC on a “catch-all” basis, with the only restraint being that a judge would review the record of access once a year.

He said this policy should be reviewed and that, when there is a public interest, records should be accessed only after the investigator has been granted prior approval by “a judge or someone with very senior legal experience”.

Minister for Public Expenditure and Reform Brendan Howlin said there is a balance to be struck when approaching the issue.

“It strikes me that the situation in Britain is one that we could look at, whereby if there is a very strong view by GSOC that particular phones of journalists need to be accessed, that that could only be done with the authority of a judge, but we’ll see what the Minister for Justice brings to Cabinet,” Mr Howlin said.

The controversy surrounding the accessing of personal data began last week when The Irish Times revealed GSOC had viewed two journalists’ phone records without their knowledge or consent on foot of a complaint about reports on the death of model Katy French in 2007.

Fianna Fáil is to propose draft legislation preventing GSOC accessing confidential communications between journalists and sources without a court order.

Under this Bill, the High Court could only grant GSOC an order “in exceptional circumstances where the public interest so required”.

The appointee, Mr Justice Murray, served as chief justice from 2004 until 2011, and twice served as attorney general.

Born in Limerick, Mr Murray (71) attended Crescent College, Rockwell College, University College Dublin and the King’s Inns. He was twice elected president of the Union of Students in Ireland (USI).

He was called to the Bar in 1967 and became a senior counsel in 1981. He had a substantial practice in civil and constitutional matters and defended the late Neil Blaney in the 1971 Arms Trial.

He represented the State in opposing the action by Independent Senator David Norris aimed at decriminalising homosexuality.

He also drafted the wording of the 1983 anti-abortion amendment to the Constitution.

1 Three relatives dead after apparent murder-suicide in Kanturk, Co Cork
2 Almost 20% of staff at Dublin hospital have antibody evidence of Covid-19 infection
3 Woman stranded in Ireland due to pandemic has ‘miracle baby’
4 Two hundred Irish retailers for all your online Christmas shopping
5 Protest at Áras an Uachtaráin over mother and baby homes Bill
Real news has value SUBSCRIBE