At almost 100 years old, Maurice Gaffney SC still works at the Bar and says he would be ‘lost without it’ 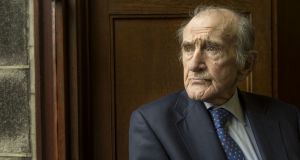 Maurice Gaffney: “I owe a lot to my colleagues. They have made me happy and have always been reliable.” Photograph: Dara Mac Dónaill/The Irish Times

When he was called to the Irish Bar, back in 1954, there were about 250 barristers in the Republic, of whom about one-fifth were senior counsel, and the same number again did not practise at all.

“It was a small community and it was easy to know everybody,” says Maurice Gaffney SC, who was born in October 1916 and is, not surprisingly, Ireland’s oldest practising barrister. (There is, he was told recently, a wheelchair-bound practitioner in London who is 105 years old.)

He appeared before both the High Court and the Supreme Court last year, and was involved in a contract law case when he agreed to meet in the Four Courts recently to discuss his career. “I enjoy it and would be lost without it,” he says of his work. “I know I will have to give it up some day but as long as I can do it . . . It keeps me alive.”

Among the huge changes in the profession over the years, he says, is the growth in the numbers involved. Barrister numbers began to increase in the 1960s, and did so steadily over the following decades.

These days there are more than 2,000 barristers on the rolls; he says it is obvious that some of them will not make a living from the profession. “The number leaving is growing. It is hard to know how many barristers there should be.” He knows of some people who, after more than a decade in the profession, are still finding it a struggle.

His work companions range in age from their 20s to their 80s and this is partly why he finds the courts a “marvellous environment” in which to work. “Age doesn’t come into it and so I don’t age.”

As far as he is concerned, he will continue to work as long as he is in a capacity to give a service. If he thought for a moment that his clients were not happy with his work, or if his solicitors thought they could do better elsewhere, then he would have a duty to stop. But he does not think that point has been arrived at yet.

Sometimes the people who need help have difficulty paying for the service but he feels barristers have a public duty to help where they can. That is a view he believes is shared by most of his colleagues.

He believes that while most professions have a culture of collegiality, few if any can match that of the Bar. However, he also believes that this culture of solidarity was somewhat damaged by what he calls the Celtic Tiger years when, because some people were making so much money, it became a measure of capability and of success and caused both those who were making the money, and those who were watching others make so much money, to change.

They were becoming more interested in money and less interested in their fellow barristers, than had hitherto been the case. This, in turn, he says, affected standards.

However, having delivered this observation, he appears anxious to balance it with more words of praise for his fellow barristers. “I owe a lot to my colleagues. They have made me happy and have always been reliable.”

He was born in Co Meath, but his father, who was a member of the Royal Irish Constabulary, moved the family to Dublin the year after the Easter Rising, to a house on Aughrim Street, in Stoneybatter. Later they moved to Upper Gardiner Street, where they had “a fine house”.

Later still, in the 1940s, they moved to Finglas, then at the edge of the city. He studied for an arts degree, joined the Jesuits, left after he got ill, and became a teacher.

After a five-year stint in Glenstal, he returned to Dublin to be with his father, who was ill, and a job with a school on James Street. He also began studying law and was eventually called to the Bar. In his early years he did work on the eastern circuit, taking prosecution cases in Co Kildare and elsewhere. He became a senior counsel in 1970. “I loved it then and I love it still.”

As well as prosecution work, he also worked in property cases. It was an area that a lot of colleagues tried to avoid because it could be tedious, but he was happy to get the work.

“I think it is marvellously attractive. It concerns everyone and it is, fundamentally, as simple as A,B,C.” He also did some tax work, and some negligence cases, and in more recent times has done contract and employment work. (For seven years he was chairman of the Employment Appeals Tribunal. )

He also knows a lot about railway law, having worked over the years for CIÉ in relation to property and other issues relating to the railway network.

In the early 1980s he was involved in an important Supreme Court case, the DPP vs O’Shea, which considered whether a jury’s verdict could be appealed. The court came down in favour of Gaffney’s argument that it could in the case concerned. The law, he adds, was later changed in response to the ruling. He was also involved in the 1996 case where Des Hanafin unsuccessfully challenged the result of the divorce referendum.

One of the great changes that has occurred over the years is the increased involvement of women in the law, now just as solicitors and barristers, but as judges too. When he was called to the Bar there were five women on the rolls, one of whom had been there since the 1920s.

One of these female colleagues later left and went to the US, to study to be a librarian, but when she returned to Ireland on holiday, Gaffney met her and they began to go out. They married and now have two grown children.

During term, he comes into the Four Courts most days. Out of term he used to play golf but these days he reads a bit and walks as much as he can. “Otherwise I waste time looking at TV, like so many others.” It is not hard to imagine him doing so while waiting restlessly for the chance to return to work.