Man jailed for having sex with a 13-year-old girl

Victim was befriended by 23-year-old attacker on Bebo website 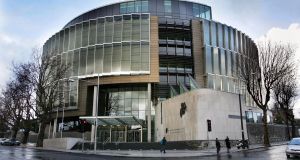 A man who had sex with a 13-year-old girl he met on a social network site after he claimed to be 19 has had been given a three and a half year prison sentence.

Graham Doyle (25) befriended the teenager through the Bebo website and had sex with her a number of times at his family home. He later admitted to gardai­ that he knew the girl was aged 13 but claimed she had consented to sex.

The victim told gardai, when she arrived at her local station in a distressed state in the company of her mother, that she was panicked at the time and didn’t know what to do.

Doyle of Ronan’s Way, Clondalkin pleaded guilty at Dublin Circuit Criminal Court to two charges of defilement of a child at his home on April 29th, 2011.

Doyle brought the girl up to his bedroom and kissed her. He had oral sex with her after convincing her that if she did so there would be no further sexual contact. He then had sex with her before going into the bathroom.

The victim took that opportunity to get dressed and Doyle came back into the room and apologised to her and they listened to music together. He repeated his apology before he got a condom and had sex with her again.

Doyle stopped when he noticed the teenager was uncomfortable and offered her vodka which she refused. He then brought her downstairs to the family sitting room.

While there, Doyle’s father walked in and he told the man he was giving the girl guitar lessons. He later brought the victim back to their original meeting place, a supermarket, bought her six bottles of alcopops and left her there to be picked up by her mother.

The details of the case were heard in October last year when Judge Mary Ellen Ring adjourned sentencing to determine what kind of treatment would be available for Doyle on his release from prison.

The case was adjourned again a second time after a report from the Probation Service indicated that they needed a further eight weeks to assess Doyle.

Today, Judge Ring noted that a probation report concluded that Doyle is at a low risk of re-offending, has insight into his crime and is willing to engage with any recommended treatment.

She sentenced Doyle to three and a half years, backdated the sentence to the date of his plea in July 2012 and suspended the final 18 months of the term.

She said Doyle’s use of the internet and social networking sites to groom his victim and build up her trust meant that she “trustingly went to his home”.

Judge Ring said the fact that he had also exchanged text messages with the victim which had sexual content meant that Doyle found it very easy to do what he did.

She accepted that a report from clinical psychologist Dr Patrick Randall concluded that Doyle has low self-esteem and is emotionally immature for his age.

However, she said he was “conscious of his own wrong doing” and this was evident in the way he “convincingly” lied to his father when he and the teenager met the man in Doyle’s house.

Judge Ring said it was “a nasty offence” that was deliberate and well thought through. She said Doyle had taken “full advantage” of the young girl and the gift of vodka to her “smacked of a pay off”.

Dr Randall previously gave evidence that he was satisfied that Doyle does not have paedophilic tendencies but rather “gravitates towards younger people because he is more comfortable with them”.

Roisin Lacey BL, prosecuting, told the court at an earlier hearing the victim, who is now aged 15, had accepted a sum of ¤5,000 offered in compensation by Doyle.

A victim impact report was prepared for the case but not read out in court.

Paul Greene SC, defending said his client was genuinely remorseful for what had happened and has attended counselling. “He has taken steps to deal with whatever led him to getting involved in this depravity,” Mr Greene said. He told Judge Ring his client has “self-image” issues and low self esteem after he was bullied at school.