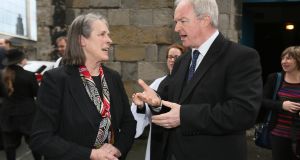 Ireland’s reputation is being damaged due to the continuing delay in establishing a judicial council, whose functions would include setting out a code of conduct for judges, Chief Justice Ms Justice Susan Denham has said.

It was “imperative” a council was established, she said.

“The hard won standard of the administration of justice in Ireland is being affected in terms of reputation, internationally, due to the long-fingering of this much needed infrastructure.”

Noting almost 15 years had passed since the 2000 report of the Committee on Judicial Conduct and Ethics recommended establishment of a council, she welcomed the priority listing of the Judicial Council Bill in this session of the Oireachtas.

Ms Justice Denham, who was secretary to the committee, said it had recommended a judicial council be set up to establish best practice for the education, support and training of judges; a code of conduct; and a complaint structure for people who felt a judge had departed from acknowledged standards of judicial conduct.

In a statement marking the opening of the new legal year, the Chief Justice also said new court rules and case management systems were part of continuing efforts to combat delays and improve access to justice.

She was very conscious of the saying “justice delayed is justice denied” and was pleased the new approach and rules allowed for speedier access to appeal structures “at the highest level of our legal system”.

She said 236 cases were dealt with by the Supreme Court in the first half of 2015 when the court also published 89 judgments and 24 written determinations.

At every level of court and court administration across the country, reorganisation and modernisation were being undertaken to ensure less delays and improved access to justice, she said.

Litigants in the High Court could now expect a hearing date for many matters in a timescale ranging from immediately to 16 weeks while delays had also been reduced in many areas in the circuit and district courts, she said.

“There will always be areas we need to improve upon,” she added.

Her statement came as the new Court of Appeal, which began work last year, continues to work to clear an inherited backlog of hundreds of cases from the Supreme Court, while also coping with hundreds of new appeals entering its list.

The Supreme Court is dealing with hundreds of new appeals as well as appeals dating back several years which have not been transferred to the new appeal court.

The fact a significant number of appeals before both courts are brought by personal litigants, most of whom are not familiar with the required appeal processes, has added to the delays.