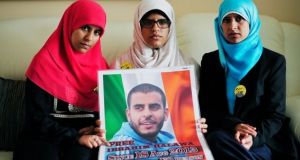 The Government will lend its support to a fresh legal application for the release from prison of Ibrahim Halawa, the young Irish man who has been detained in Egypt for three years.

Lawyers for Mr Halawa, who is from Firhouse in Dublin, are expected in the coming days to lodge an application for his release by presidential decree under Egypt’s law 140, which allows for the transfer of accused or convicted prisoners from Egypt to their home country.

The move follows the rejection by the speaker of the Egyptian parliament of an all-party Oireachtas motion calling for Mr Halawa’s immediate release. Insisting on the independence of the judiciary, speaker Ali Abdel-Aal said the motion “directs accusations against the Egyptian judiciary authority and interference in the course of justice,” according to a statement cited by the state-owned Ahram newspaper. Mr Abdel-Aal said fellow MPs had asked him to issue a statement in response to the Oireachtas motion, the report stated. The speaker was quoted as saying that “nobody can interfere with the affairs of justice or judicial cases and any interference will be considered a crime.”

Mr Halawa (20) has been in prison since August 2013, when he was arrested at the Fateh mosque in Cairo during protests against the ousting of then-president Mohamed Morsi. He and 493 others have been put on mass trial, but the proceedings have to date been adjourned 13 times – most recently last month – and no evidence has been heard. About 80 of the defendants have been tried in absentia. The trial is set to resume in October.

Responding to the reports of Mr Abdel-Aal’s statement, Mr Halawa’s solicitor, Darragh Mackin, said the basis for the speaker’s objection appeared to be that Mr Halawa was accused of serious criminal offences and that to release him would interfere with the separation of powers.

Sources in the Department of Foreign Affairs are confident the Government will lend support to a formal application by Mr Halawa’s legal team for his release under law 140. Mr Mackin said he expected the application to be lodged before the end of the week.

The Government is expected to make its support clear in a letter to the Egyptian authorities from either Taoiseach Enda Kenny or Minister for Foreign Affairs Charlie Flanagan. The Government supported a similar application in February 2015, but no formal refusal was ever received from the Egyptians by Mr Halawa’s lawyers.

Speaking in Dublin yesterday, Mr Flanagan said Mr Halawa’s detention without a verdict was “unfair and unjust”. “Of course I appreciate the separation of powers and that this is a matter for the Egyptian criminal justice system. However, I am concerned that an Irish citizen continues to be detained without a verdict and I want this matter brought to a conclusion,” he said.