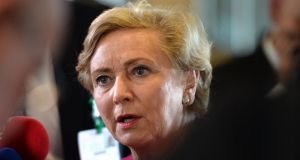 The Government has dropped plans to legislate for surrogacy as part of an overhaul of family law. File Photograph: Dara Mac Dónaill/The Irish Times

The Government has dropped plans to legislate for surrogacy as part of an overhaul of family law.

The general scheme of the Children and Family Relationships Bill, a wide-ranging reform package published earlier this year by then Minister for Justice Alan Shatter, set out plans to ban commercial surrogacy and clarify the rights of children born through surrogacy.

In a revised version of the scheme, published yesterday by Mr Shatter’s successor, Frances Fitzgerald, surrogacy has been removed altogether.

Ms Fitzgerald said this was because a Supreme Court decision on the issue was pending and that there were “critical issues needing to be resolved”.

She added more policy work and consultation was required on the issue.

The Bill, designed to take account of the growing complexity and diversity of modern families, proposes key changes to the laws on adoption, custody and assisted human reproduction.

Whereas existing laws state that only married couples or sole applicants can seek to adopt a child, the scheme published earlier this year extended the right to adopt to same-sex civil partners.

The latest version of the scheme goes further, by allowing cohabiting couples who have been living together for three years in a committed relationship to adopt children jointly.

Ms Fitzgerald said it would be easier for unmarried fathers to become guardians automatically if they lived with the child’s mother for 12 months, including at least three months following a child’s birth.

“This should particularly benefit young unmarried fathers who may not be in a position to live with their child’s mother for 12 months before the child’s birth,” she said.

Another addition to the draft law, which was approved by Government this week, is a provision to allow a donor-conceived child to trace his or her identity. Under the proposals, clinics and hospitals would be required to provide details of donors and children to a national register.

As a result, future use of anonymous donor eggs or sperm would be banned.

The provisions on guardianship have also been modified.

Guardians who are not parents would be able to take day-to-day decisions regarding the child’s place of residence, education or religious upbringing, unless a court specifically conferred those powers in the best interests of the child.

In a further change, courts will have the option to appoint a “child’s views expert” to ascertain the views of the child in guardianship, custody and access cases.

The first draft of the Bill was published last February on the eve of a Supreme Court appeal by the State against a High Court decision that the genetic parents of twins born to a surrogate were entitled to be registered on the birth certificates as their legal parents.

The legal definition of motherhood is central to the appeal.

The seven-judge Supreme Court is expected to give to give its judgment next month.

The removal of surrogacy from the draft law will mean that the existing provisions, which provide for a father to secure parentage of a child born through surrogacy, if genetically linked to the child, will continue to apply.

A commissioning mother will be able to apply for guardianship of the child.