‘Fanfare announcements’ on recruitment at odds with fall in numbers, says AGSI 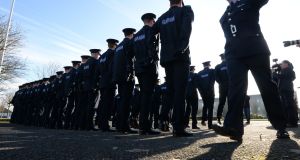 Recent “fanfare announcements” that Garda recruitment has begun and is accelerating “belies the reality” that numbers have continued to decrease, the Association of Garda Sergeants and Inspectors (AGSI) has said.

The Garda Representative Association (GRA), the body representing rank-and-file officers, has described as “perturbing and disheartening” the revelation that numbers in the force continued to decline in 2014 and 2015.

Both organisations were responding to figures obtained by The Irish Times revealing that retirements, departures from the Garda for other reasons and career breaks exceeded the number of recruits hired since the recruitment moratorium was lifted in 2014.

AGSI deputy general secretary John Jacob said the organisation’s members continued to be concerned that the force did not have the resources to provide the standard of policing service demanded by the public.

“Indeed, announcing 600 new gardaí today would not mean a positive impact would be felt immediately at station level, considering the length of time it takes to get a person through training and fully operational.”

Mr Jacob said he was aware that at least 450 uniformed gardaí currently assigned to Garda stations to police communities nationwide would be promoted to sergeant or moved into detective posts.

While these promotions were needed, when added to retirements, departures and career breaks there arose “a significant impact on the Garda organisation’s ability to provide first-line responders”, he said.

Garda management claims about the number of personnel available for patrolling and other police work in the community was not matched by the reality of resources on the ground, claimed Mr Jacob.

The AGSI said 3,663 gardaí had left or retired from the force since the start of 2007. And while numbers in the Garda were now at 12,800 including those in training, in Scotland there were 17,261 full-time equivalent police officers. The population being policed by the Garda was 4.6 million, as against 5.2 million in Scotland.

GRA president Dermot O’Brien said his organisation had long expressed fears that current rates of recruitment would mean a wait of decades before manpower returned to peak levels of five years ago, when there were more than 14,500 Garda members.

“We have been told of ‘seamless ongoing recruitment’ but the true picture is that there are fewer gardaí serving today than in January 2014 . . . There are around 2,500 fewer gardaí since 2010 as a result of the recruitment freeze and through retirements, long-term illness and incentivised career breaks,” he said.