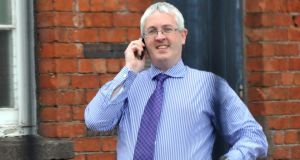 Jeremiah Collins: pleaded guilty to 70 sample charges relating to the theft of some €188,000 from the Cork Centre for Independent Living. Photograph: Michael Mac Sweeney/Cork Courts


A former financial administrator who admitted stealing over €500,000 from a charity where he worked to feed a gambling addiction has been sentenced to three years in jail with the final 18 months suspended.

Jeremiah Collins (35), with an address at Morehampton Road, Donnybrook, Dublin, pleaded guilty to 70 sample charges relating to the theft of some €188,000 from the Cork Centre for Independent Living on various dates between March 2007 and March 2010.

Det Garda Tomas O’Connor told Cork Circuit Criminal Court yesterday that, while the sample charges to which Collins had pleaded guilty related to €188,000, the full amount he had stolen from the charity amounted to €535,000.

Collins had covertly repaid €30,000 during the criminal investigation and later repaid another €7,000, leaving the charity at a loss of €498,586. He had intended paying €400 a month but no payments had been received by the charity since May, the court was told.

Det Garda O’Connor agreed with defence barrister, Don McCarthy that Collins had devised the scheme whereby he was able to steal the money over a number of years and that it was Collins who had brought it to the charity’s attention after feeling remorse.

Mr McCarthy said he was surprised to hear no money had been paid since May as Collins was working three part-time jobs to meet his planned repayment schedule of €400 a month. Det Garda O’Connor accepted further payments might have been made since May.

Mr McCarthy said the reality was Collins would never be able to pay back the full amount even if he paid back money for 100 years. However, jailing him would mean he would not be able to work and the charity would get no money back.

Collins had gone for treatment for his serious addiction problem and was now working with Tabor Lodge Addiction Treatment Centre in helping other gambling addicts deal with their problems, said Mr McCarthy

Remorse
Judge Sean O Donnabhain noted that Collins had saved the State the expense of what would have been a very difficult and time-consuming trial by his guilty plea and he accepted that it was Collins himself who had brought the offence to light in a moment of remorse.

He also noted the probation service found there was little risk of Collins reoffending.

While all those factors were in Collins’s favour, the judge said he had to take account of the “staggering sum of money involved” and the breach of trust he had committed as a financial administrator.

He said that in those circumstances, he had no option but to impose a custodial sentence.

He sentenced Collins to three years in jail, suspending the final 18 months on condition that he be of good behaviour and keep the peace for a period of 18 months.