Average life sentence currently 17 years, up from 7½ in 1970s and 1980sSmall group of notorious killers kept in prison for up to 50 years 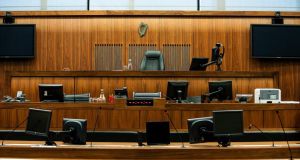 The Courts of Criminal Justice where the trial was held. Photograph: Collins Courts.

Graham Dwyer’s sentencing has been postponed for four weeks but the only term open to Mr Justice Tony Hunt to impose on him is that of life. What that means is an open-ended question.

Dr Diarmuid Griffin, a law lecturer in NUI Galway, recently conducted an extensive study of lifers and found the average term served by those released in recent years was 17 years. The average life term is increasing, having been as short as 7½ years in the 1970s and 1980s.

It is inconceivable that Dwyer will spend less than 30 years in prison. He took a life for sexual gratification after grooming his vulnerable and mentally ill victim. He did not plead guilty and would be regarded as likely to reoffend in Ireland or abroad.

For those reasons, and because signing off on his release would be politically unpopular, Dwyer is likely to become the latest member of a small group of killers who spend years longer in prison than other murderers.

Malcolm Macarthur spent 30 years in prison for the 1982 murder of Bridie Gargan, whom he killed in the Phoenix Park, Dublin.

Jimmy Ennis has been in prison for just over 50 years. In 1964 he killed farmer George Applebe (54) with an iron bar after breaking into his house in Co Cork.

Along with fellow Englishman Geoffrey Evans, John Shaw (72) was jailed in 1978 after abducting two women, raping and murdering them in Galway and Wicklow in 1975. Evans died in 2012 but Shaw is still in jail, 37 years later.