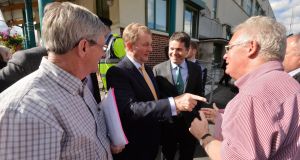 A total of €1.6 million is to be invested into Dublin’s north inner city in an attempt to solve the difficulties of drugs and gang related violence facing the area.

Taoiseach Enda Kenny met community leaders on Wednesday to announce the re-opening of Fitzgibbon Garda station and a series of one-off investments in the area.

Mr Kenny said he would be taking charge of a Ministerial taskforce charged with examining the challenges in the area.

Former Workplace Relations Commission chairman Kieran Mulvey has been asked to prepare a report by the end of November outlining a 10-year vision for the inner city.

Mr Kenny said the inner city had been neglected for decades but he was determined to put an end to this oversight.

“The north inner city, because of its difficulties compounded by criminal activity and gangland crime, has had an exceptional level of publicity and 99 per cent of the people who live in this community would give you the shirt off their back,” he said.

“This is their home and they are proud of it, I intend to see to it that people will be able to walk these streets in safety.”

The Government was forced to take action after a series of high-profile murders in the area. Tánaiste Frances Fitzgerald previously established an armed Garda unit for the inner city.

Mr Kenny said the monies would be made available in July with €1 million to be used for sports facilities, €500,000 for tackling issues such as graffiti, derelict sites and litter and €100,000 to support drug-related projects in the area.

Mr Kenny said he had listened to the concerns raised by those in the community. “This is not about providing money to communities; it’s about demonstrating and providing that when the Government leads and works with a community, things can change for the better.”

Minister for Public Expenditure and Reform Paschal Donohoe, a TD for the area, said residents would not have accepted a long-term plan from the Government.

He said intervention was required immediately to ensure confidence in the process.

“A short and long-term agenda with fixed targets must be clearly set out in advance to ensure that targets are met and commitments are honoured,” he said.

“Continued engagement with local communities, organisations and residents’ associations in the north inner city is essential for the duration of the Task Force plan. Furthermore, it requires the support of all political parties in the Dáil to have significant effect.”