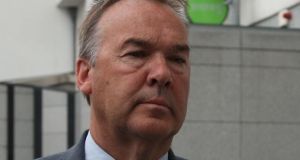 Tributes have been paid at the Special Criminal Court to Colm Fox, the detective superintendent found dead at Ballymun Garda station on Saturday night, who had been the lead investigator of the shooting at the Regency Hotel in Dublin two years ago.

The tributes were led by Sean Gillane SC, the senior prosecuting counsel in the trial of Patrick Hutch, who is accused of murdering David Byrne at the Dublin hotel in February 2016.

The trial had been due to resume on Tuesday morning but was instead adjourned until Monday.

Mr Gillane said it was “with a heavy heart” that he was informing the three-judge, nonjury court of Det Supt Fox’s “sudden and tragic passing”. He said he had known the garda “for the best part of 20 years” and had defended many cases that he prosecuted.

“No matter how hard or heavy the fight, Mr Fox was never anything less than the gentleman,” the barrister said, adding that he was “in that category of man who never had to raise his voice, because of the respect he naturally commanded”. Mr Gillane referred to the detective as a “complete policeman” who “gave of himself completely to public service”.

The defence barrister Michael O’Higgins SC said that Det Supt Fox was “universally admired and regarded by the bar”, and “regarded with enormous affection, which in an adversarial setting is no mean achievement”.

Mr Justice Tony Hunt, sitting with Judge Patricia Ryan and Judge Ann Ryan, said that the court wanted to join the barristers’ sentiments. “These things put our daily disputes into context,” the judge said, extending sympathy and condolences to the detective’s family, friends and colleagues.

The case had already been adjourned, last week, after the defence asked to be provided with emails exchanged between four gardaí involved in the case. Mr Justice Hunt said he was anxious to continue the case but the court “had to play second fiddle to developments like this”.

Mr Hutch (25), of Champions Avenue in Dublin, is pleading not guilty to the murder of David Byrne (34) on February 5th, 2016. He also denies possessing three AK-47 assault rifles. The shooting took place during a boxing weigh-in at the hotel, the court has heard, when a man dressed as a woman and another wearing a flat cap, armed with handguns, followed by three people dressed in tactical-style Garda uniforms and carrying assault rifles, raided the venue.

The prosecution claims that Mr Hutch was the man dressed as a woman and that he did not shoot Mr Byrne but was part of a “shared intention” to commit the offence.