Passenger to pay €2,500 over ‘sick’ Ebola joke on Dublin plane 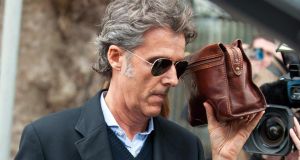 An Italian businessman is to pay €2,500 to charity for making a private joke about the Ebola virus to his daughter on an Aer Lingus flight.

IT company director Roberto Binaschi, who had come to Ireland with his family to attend a conference, told a judge today, “I don’t know how to apologise”.

Judge Anthony Halpin said that given the seriousness of the Ebola virus, Mr Binaschi’s prank was a “sick joke” and comparable to a bomb scare.

However, he noted that Mr Binaschi was apologetic and had offered to pay €2,500 to charity.

Judge Halpin directed that the money should go to the Capuchin Day Centre, which helps homeless people in inner-city Dublin, and he applied section 1 (1) of the Probation Offenders Act.

This means Mr Binaschi, who did not comment after the case, has been spared a criminal record as well as a possible prison term.

At about 1pm yesterday , emergency services including the Garda, Dublin Airport Police and the Health Service Executive (HSE) took action after the alarm was raised on flight EI 433, from Milan to Dublin.

On landing, the plane carrying 142 passengers, was sealed off for just over an hour while medical tests were carried out. After screening it was established that there was no trace of the deadly virus on board.

Three passengers, two women aged 51 and 23, and the 56-year-old man were arrested and brought to Ballymun Garda station.

The two women were later released without charge but Mr Binaschi, from Corso Argentina, Vigeavano, near Milan, in northern Italy, was held overnight and brought before Dublin District Court this morning.

The 56-year-old pleaded guilty to engaging in threatening, abusive or insulting behaviour on an aeroplane contrary to the Air Navigation and Transport Act.

Judge Halpin was told that Mr Binaschi had taken a sip from his daughter’s cup about 20 minutes before landing. “After taking a drink, he then wrote ‘attenzione Ebola’ on the lid and handed it to his daughter.” She finished the drink and the cup was then dumped.

On arrest, he immediately admitted he had been joking with his daughter when he wrote the words and he expressed regret for the disturbance.

Defence solicitor Michelle Finan said her client was a company director who had come to Dublin for a business conference; he was a man of good standing who trades with Ireland and hopes to “create jobs”.

She said that the offence was “skirting on the reckless end”. Pleading with the court to spare him a criminal record, she told Judge Halpin that her client’s business friends had collected €2,500 to be donated to charity.

His wife was asleep when it happened, the court was told.

In response to the mitigation plea, Judge Halpin said: “I cannot think of a more serious offence given the present day fear of Ebola.”

“I was just thinking, how serious is this offence? It is only comparable with someone writing on a napkin, ‘there is a bomb on the plane’, that is how serious,” the judge said.

Mr Binaschi then stepped into the witness box and Judge Halpin greeted him with “Buongiorno, grazie”. Ms Finan then asked him to explain while his wife and daughter watched from the public gallery.

In evidence, the businessman told the court, via an interpreter, that he had taken a sip from his daughter’s drink.

“Knowing the fact that she is quite keen on cleanliness, as a joke, I took one of the pens she was using to study, I wrote that sentence and I put it on the cup in front of her.”

He told Judge Halpin that when the drink was finished he gave the cup to a male flight attendant to throw away.

“A few minutes following throwing away the cup, a steward returned to us. We were in the front seat and they were always able to see what we were doing and what we were saying. The steward, who did not speak Italian, asked what was written, I told him, he smiled, he left, that is what happened,” Binaschi said.

He agreed with his solicitor Michelle Finan that he understood the anxiety he had caused.

“Never again in my life, will I treat such subjects with such a superficial attitude in a public space,” he said, adding that he did not know how to apologise.

Judge Halpin stressed the court had to send out the message that it was a serious case and he did not want people doing this on other flights.

However, he also noted the businessman had no previous convictions and was not involved in criminality. He believed that Mr Binaschi had learned a lesson and he noted that the defendant looked physically upset.

After the charitable donation was offered, the judge applied the Probation Act saying Mr Binaschi was “getting a chance today, it is a very serious matter but I think the message has gone out”.