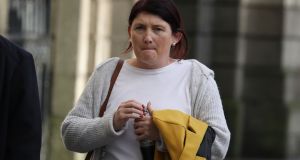 A woman who sued over losing almost 1.5 litres of blood following the birth of her baby at Kerry General Hospital has lost her High Court damages claim.

The court will decide next week who must pay the substantial costs of the six-day hearing.

Anne Marie Clifford had alleged delay of 36 minutes in getting her to theatre when she started to bleed after the birth of her daughter seven years ago.

Ms Clifford (48), from Killarney, Co Kerry, had sued the HSE and the Kerry hospital claiming they failed in their duty to take sufficient steps in time to stop her haemorrhage and she was traumatised by the incident. The claims were denied.

Dismissing her action on Thursday, Mr Justice Kevin Cross said he could not conclude the HSE or hospital were in any way negligent in not referring Ms Clifford to theatre sooner.

There was, he noted, no criticism from Ms Clifford in relation to the events leading up to the birth of her daughter in 2012 or of events later at the operating theatre.

The criticism concerned an alleged 36-minute delay in sending Ms Clifford to theatre after her daughter’s birth when the bleeding was identified.

The judge accepted Ms Clifford was a “completely genuine” witness who gave her evidence truthfully. Any inconsistencies were fully explicable by the fact she is clearly traumatised by recollection of the incidents, he said.

The judge accepted expert evidence on behalf of the HSE and hospital that they followed the approved practice of a regional hospital at the time.

He also accepted expert evidence, while reactions of the hospital were not as rapid as would occur in a major maternity unit, they were not unacceptable.

He believed it was likely, had Ms Clifford been taken to theatre 36 minutes earlier, she would still have lost a significant quantity of blood, more than one litre.

The repair would have taken a considerable time in theatre, he said. Accordingly, she was likely to have been in a dangerous position and to have suffered as a result some psychological damage.

Had the matter been dealt with sooner, he believed Ms Clifford would have suffered less of a blood loss and probably less psychiatric trauma but that was “speculation” and, given his findings on liability, “ultimately unnecessary speculation”, he concluded.