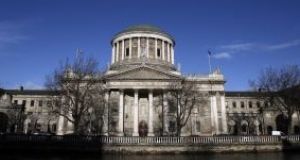 One of the women affected by the CervicalCheck controversy has been granted leave at the High Court to serve a personal injuries summons on an American pathology clinic.

On Wednesday, Ms Justice Miriam O’Regan told Jacqueline Hopkins, of Carn Ard, Circular Road, Galway, that service of the proceedings could be made out of the jurisdiction on Clinical Pathology Laboratories Limited, of Wall Street, Austin, Texas.

Barrister David Browne, who appeared for Ms Hopkins with Peter McDonnell Solicitors, told the court that Clinical Pathology Laboratories was one of five defendants including the HSE, Quest Diagnostics Inc., Medlab Pathology Limited and Sonic Healthcare (Ireland) Limited, being sued by his client.

In an affidavit, her solicitor Mr O’Donnell said that in April 2009 Ms Hopkins had a smear test carried out under CervicalCheck, the National Cervical Screening Programme, as a result of which she had in 2010 undergone a full hysterectomy for a micro invasive cervical carcinoma.

Mr McDonnell, whose company operates out of Capel Building, Mary’s Abbey, Dublin, told the court Ms Hopkins had undergone further smear tests in January 2011 and in February 2012 both of which had been analysed by Clinical Pathology Laboratories Limited.

He said Ms Hopkins claims that Clinical Pathology Laboratories or its agents were guilty of negligence or breach of duty in having failed to prescribe a correct course of treatment and his legal firm believed that Ms Hopkins had a good cause of action against the laboratory and each of the other four defendants.

The judge granted Ms Hopkins’ legal team liberty to issue and serve a personal injuries summons on Clinical Pathology Laboratories Limited at its Austin, Texas, headquarters and allowed the company 35 days to enter an appearance.