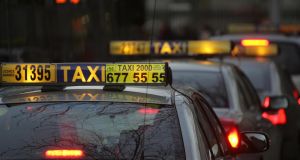 However, the judge granted a 28-day stay on the costs order to allow for an appeal. The test case was taken on behalf of 1,100 taxi drivers seeking compensation due to losses they felt were incurred by deregulation in 2000, when the cost of taxi licences plummeted overnight.

Briefing documents prepared for current Minister for Transport Paschal Donohoe in 2014 indicated that the State may have faced claims of over €400 million if the licence lawsuit was successful.

Speaking after the ruling, former National Taxi Drivers Union president Tommy Gorman indicated that he had always believed the costs bill would be lowered because it was an important test case, even after Mr Justice Peart ruled against them last October.

He hopes there will be a “rally” for Mr Muldoon, Mr Malone and Mr Kelly to help with the costs. “We understood that when you take a test case costs would never be levelled against you, but Judge Peart didn’t mention the words “test case”, even though our legal team referred to it when the submissions were set out on the last day,” he said.

The three sought damages and declaratory orders claiming that because the minister and/or the named local authorities (Dublin City Council and Ennis Town Council) permitted a licensing regime to operate as it did over so many years, they suffered immediate and significant losses as a result of overnight deregulation.

Mr Muldoon and Mr Kelly claimed the minister and State acted beyond their powers by delegating the role of deciding on the number of licences to the local authorities and in breach of their right to earn a livelihood and constitutional rights.

Mr Muldoon also sought declarations, including that the city council acted contrary to competition law and the defendants, or some of them, had been unjustly enriched as a result of the regulatory regime operated and/or approved by them.

Last October, Mr Justice Peart ruled the claims made by all three men must be dismissed. Dealing with costs, he declined to certify for two senior counsel for the State and Dublin City Council after lawyers argued a great deal of work had had to be put into the matter. The defendants denied the claims.

The judge said the issue of whether there should be costs for two senior counsel was within the power of the Taxing Master.

Mr Gorman said it was a “bad day for the profession in every sense”, and said Mr Kelly was an example of how licensed drivers’ livelihoods were adversely affected by deregulation. “He bought in at £140,000 about three months before deregulation, so you can understand the substantial mortgage that was there,” Mr Gorman said.

The costs are expected to be “substantial”.