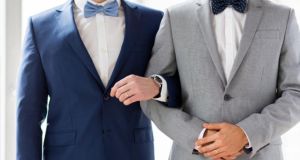 Gerry Walshe is seeking to appeal a refusal by President of the High Court, Mr Justice Nicholas Kearns to allow him bring a petition challenging the May 22nd referendum result.

An application for a stay aimed at restraining the issuing of a certificate verifying the result of the same sex marriage referendum has been adjourned to Friday’s sitting of the Court of Appeal.

Gerry Walshe, an electrician of Lisdeen, Co Clare, wants to appeal last week’s refusal by the President of the High Court, Mr Justice Nicholas Kearns, of permission to Mr Walshe to bring a petition challenging the May 22nd referendum result.

Before his appeal is determined by the Court of Appeal Mr Walshe is seeking a stay, pending the appeal, restraining the issuing of the necessary certificate verifying the referendum result.

The matter came before Mr Justice Peter Kelly on Thursday. The Judge, after being informed at that an appeal had been lodged and served on the state, adjourned the matter to allow Mr Walshe, who is representing himself in the action, amend his notice of appeal.

The Judge said while Mr Walshe intention is to appeal the decision made by the President of the High Court, the paperwork lodged with the court indicated he wished to appeal an earlier procedural decision made by Ms Justice Mary Faherty who had dealt with the matter prior to Mr Walshe’s application was determined by Mr Justice Kearns.

The judge also said that he was placing a stay on the certificate verifying the result from being issued until the matte returned before the Court of Appeal on Friday morning.

Richard Humphreys SC, for the State, said it had no objection to allowing Mr Walshe amend his appeal. Maurice J Lyons - a gardener, with an address at Callan, Co Kilkenny - had also been refused permission to bring a petition challenging the referendum had also expressed his intention to appeal, counsel said.

When the matter came before the court earlier this week the court heard the state wanted both cases to be addressed together as soon as possible and would facilitate whatever steps were necessary to have any appeal speedily determined, he added.