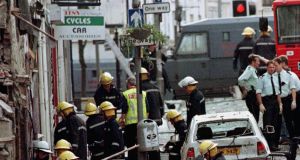 Two men from Co Louth who were among four men found liable in a Northern Ireland High Court civil action for the 1998 Omagh bombing have denied having any significant assets to go towards paying a £1.6m judgment awarded to relatives of those killed.

Liam Campbell and Michael Colm Murphy were questioned before the Master of the Dublin High Court, Edmund Honohan, on Wednesday by lawyers for relatives of the 29 victims of the atrocity.

The questioning was in aid of execution of the Northern Ireland court’s judgment, awarded made after both men - along with Michael McKevitt and Seamus Daly - were found responsible for the bombing during in civil proceedings in the High Court in Belfast.

The families’ lawyers examined the two men on Wednesday concerning any shares or interests in companies they might have, any savings or monies held in bank accounts and any debts.

In what were sometimes heated and testy exchanges, both men said they had no interest in several properties.

Mr Campbell, Upper Faughart, Dundalk, said he has been unemployed for many years and last received a social welfare payment in the 1980s.

The only assets he owns are half shares, along with his wife, in the family home and in a 3.5 acre plot of land adjoining their home, he said.

Mr Murphy, of Lower Faughart, Co Louth, who strongly denied anything to do with the Omagh bombing or having any involvement in the IRA, said he had no assets as his ex-wife had “cleaned me” following their divorce.

The two men were ordered by the Dublin High Court in June to provide sworn statements disclosing their assets and means. The victim’s families claimed the two had failed to provide such statements.

Last month, their lawyers secured orders from Mr Justice Anthony Barr directing the two be attached and brought before the High Court in Dublin to explain their alleged contempt.

Both men, whom their lawyers said had come to court in a voluntary capacity, attended for questioning on Wednesday before Master Honohan.

In response to questions from Andrew Robinson BL, for the families, Mr Murphy angrily rejected an assertion by counsel he was ever a member of the IRA.

Because he was charged, “nobody wanted to have anything to do with me” and he lost his construction business, which had employed 60 people, he said.

He accepted having had previous involvement with property assets and a company but said he now owned “nothing”.

After his arrest, everything “got fucked up”, he said. His marriage ended and “my ex-wife cleaned me”, he said.

While being questioned, Mr Murphy became agitated. When asked about certain properties, he told counsel to put such matters to his former wife.

He also denied having any interest in a several properties in Co Louth. He said those belonged to other parties and asked if people were living “in cuckoo land”. Several matters put to him were part of a “bullshitty agenda”, he added.

In response to Mr Robinson’s questions, Mr Campbell denied having any interest, now or in the past, in six properties in Athlone Co Westmeath, Castlebar, Co Mayo or in Co Louth. He also denied any interest in companies.

Mr Campbell rejected that and said the only properties he had any interest in were the family home and adjoining lands.

Following their examination, both men undertook to each provide a sworn statement containing a list of all assets in which they have an interest worth more than €5,000 by October 23rd.