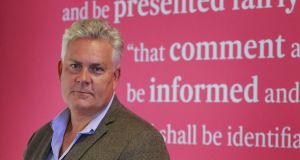 The former chief executive of Independent News and Media (INM), Gavin O’Reilly, has begun legal action ahead of formally suing the company for alleged breach of privacy.

The company’s former director of corporate affairs, Karl Brophy, has made similar moves, alongside Mr O’Reilly.

The pair filed affidavits in the High Court on Wednesday asking for it to declare formally that they may use information assembled by the Office of the Director of Corporate Enforcement (ODCE) to sue INM.

Mr Brophy is the first of 19 people, identified by the ODCE, to initiate such proceedings. The 19 names emerged when the ODCE investigated a data breach inside INM during which thousands of emails were hacked.

As a result, and at the request of the ODCE, the High Court appointed inspectors to examine the company.

Mr O’Reilly’s intended case against INM is understood to rest on the disclosure by Robert Pitt, another of the company’s former chief executives, that Mr O’Reilly was specifically targeted, along with Mr Brophy and INM’s then legal advisor, Simon McAleese, during the hacking exercise.

The affidavits remain sealed but it is believed they rely heavily on information, unearthed by the ODCE and already aired in court, which they wish to use now against INM and with the High Court’s explicit blessing.

INM declined on Wednesday to comment on Mr O’Reilly and Mr Brophy’s action.

In earlier proceedings involving the ODCE, it has been claimed that the data breach was directed by the former chairman of INM, Leslie Buckley, who was appointed to that position at the request of Denis O’Brien, INM’s largest shareholder.

Mr Buckley, who is also being sued by INM, has claimed that the data breach occurred during an alleged cost-cutting exercise, an explanation not accepted by the president of the High Court, Mr Justice Peter Kelly, when he found in favour of the ODCE and approved the appointment of inspectors. Mr Buckley has strongly denied any wrongdoing.

Mr Healy and Ms O’Brien both worked as barristers for the Moriarty Tribunal. Journalist Sam Smyth reported on the tribunal for the Irish Independent.

It found further that Mr Lowry “secured the winning” of a mobile phone licence awarded to Mr O’Brien.

Mr O’Brien rejects the findings as merely the “opinion” of one man, Mr Justice Moriarty.

In appointing inspectors, Mr Justice Kelly suggested that anyone whose emails were hacked had a case against whoever was responsible.

“The rights and entitlements of some or all of these 19 people may have been transgressed in a most serious way by this activity,” he said in his judgment delivered on September 4th, 2018.

It is not yet known what defence, if any, INM may lodge in response to the claims by Mr O’Reilly and Mr Brophy. However, in its own legal action against Mr Buckley, in correspondence opened in court, the company has described the data breach, which it says he ordered, as having “caused considerable distress to the individuals directly affected and to many other individuals whose data may have been included”.

The company has also contradicted the claim that the data search was a cost-cutting exercise.

“It appears that the data searching exercise was not for the purpose stated by your client [Mr Buckley],” INM solicitors wrote to Mr Buckley’s solicitors, adding that it was “for an ulterior purpose; that it involved extensive searching against INM data for information relating to 19 specified individuals, none of whom bore any direct relation to the cost-cutting exercise for which your client has repeatedly stated the data was collected and searched; and that your client received regular updates on the searching exercise from individuals and entities whose involvement he did not disclose.

“This also raises the issue of whether the searching was conducted for and on behalf of the major shareholder of INM and for his personal benefit.”

The major shareholder is Mr O’Brien.