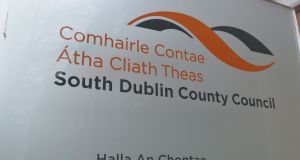 South Dublin County Council wrote on January 6th to clarify why the application had not been successful but the precise reason for the refusal remains unclear, it is claimed. Photograph: The Irish Times

A homeless family living in emergency hotel accommodation has sued South Dublin County Council over its refusal to give them priority status for housing.

Rosemary and Stephen Mongan have been in emergency hotel accommodation in Dublin city centre with their young child since mid-December. Mrs Mongan is pregnant and she and her husband have health problems, the High Court was told.

They had lived in private rented accommodation in Edgeworthstown, Co Longford, but became homeless in September 2015 after their landlord decided to sell the property.

They sought priority status and say that application was verbally refused and they were advised Longford County Council had a duty to provide them with accommodation. There is no basis in law for refusing them priority status because they first became homeless in Longford, it is claimed.

They say they have a connection to south Dublin as they have relatives living in the council’s administrative area and, due to the family connection, were approved by South Dublin Council for social housing support in October 2015.

After their lawyers sought reasons for the repeated refusal, the council wrote on January 6th to clarify why their application has not been successful but the precise reason for the refusal remains unclear, it is claimed.

Mrs Mongan and her husband contend that their housing situation is contributing to their health problems.

Since becoming homeless, says the family, despite assistance from Focus Ireland, they have been unable to find private rented accommodation and for the first few months had to change accommodation on a nightly basis. Their emergency accommodation at a hotel since mid-December is cramped and inappropriate for their needs, they argue.

They are represented by Mercy Law Resource Centre Solicitors and want various court orders, including quashing the council’s decision of January 6th refusing them priority status and requiring it consider afresh their request for priority status.

The family claims the council acted in breach of duty by not giving reasons for the refusal which, they argue, was irrational, an error of law and breached their rights under the Constitution and European Convention on Human Rights.

Permission to bring the action was granted by Mr Justice Richard Humphreys who returned the matter to later this week.

1 Why Sinn Féin will not call the State by its name
2 McDonald rejects idea SF public meetings ‘an affront to democracy’
3 Coronavirus: Questions over Ireland’s readiness for what might come
4 Varadkar says Sinn Féin rallies a ‘campaign of intimidation and bullying’
5 Maureen Dowd: For the White House parasite, all restraint has gone
Real news has value SUBSCRIBE