Grand National at Fairyhouse would have been affected if injunction stood 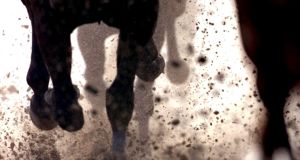 A block on bookies’ pitches at race courses has been lifted in time for the Grand National. Photograph: Reuters/ Marcelo Del Pozo

A block on the operation of bookies’ pitches in the premium areas of the country’s horse racing courses, including at Fairyhouse over Easter, has been lifted by the High Court.

Professional bookmaker Brian Graham got an injunction last month effectively preventing the operation of pitches in the premium areas of racecourses but not in the ring or corporate areas.

Mr Graham claimed a new rule covering premium areas brought in last year, under agreement between the Irish National Professional Bookmakers Association (INPBA) and the Association of Irish Racing (Air), meant he could no longer avail of a seniority right which he enjoyed.

Those “Racecourse Executives’ Seniority and Pitch Rules” provide that each bookmaker holding a seniority at a particular racecourse is offered the opportunity to apply for a position, with applicants graded according to seniority. Where seniorities are equal, there is a draw.

Premium areas are particularly lucrative for bookies and having pitches in those areas made them more attractive for racegoers, the court heard.

He then got leave from the High Court to bring a judicial review challenge to the new rules and to seek an injunction preventing their implementation.

The case was against Horse Racing Ireland (HRI), the statutory body which oversees the industry and also collects fees for the pitches at racecourses, and against the Pitch Tribunal.

The order had the effect of suspending operation of bookie pitches in the premium areas, the court heard.

As a result, the Pitch Tribunal, supported by the INPBA and Air, notice parties to the case, asked the court to discharge the injunction.

On Thursday, Mr Justice Seamus Noonan said he was satisfied to do so after finding damages would be an adequate remedy for Mr Graham should he succeed in his main action. The balance of convenience also favoured lifting the injunction.

The judge noted two of the biggest race meetings of the year which are due to take place over Easter — including the Grand National at Fairyhouse — would be affected if the injunction stood.