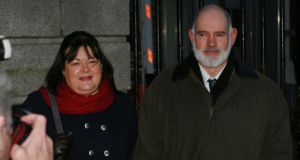 Mary and Brian O’Shaughnessy from Bird Hill, Co Tipperary, leave the Four Courts after the announcement of a settlement in their High Court action for damages. Photograph: Courts Collins

A couple whose home was demolished without any prior notice to them while a new dual carriageway was being constructed between Limerick and Nenagh has settled their High Court damages action.

Brian and Mary O’Shaughnessy claimed the last eight years had been a nightmare after their single-storey two-bedroom Irish farmhouse, at Annaholty, Birdhill, Co Tipperary was razed to the ground and the site cleared on September 6th, 2006.

As a result of the loss of thehouse, which the couple was renovating at the time, they sought damages from Limerick County Council, the National Roads Authority, RPS Consulting Engineers Ltd and EGIS Route Scetauroute SA (which was a joint venture in the name of RPS Scetauroute JV) and Midland Fencing Ltd for negligence.

It was claimed Limerick County Council and the NRA were responsible for the operation, design and acquisition of land, and oversaw construction of the N7 dual carriageway scheme. The joint venture, it was alleged*, are consultant engineers contracted to build the carriageway.

Midland Fencing, it was claimed*, was subcontracted by the joint venture and carried out the demolition of the O’Shaughnessys’ home.

Mr Justice Donald Binchy was informed on Friday by Michael O’Donnell BL for the O’Shaughnessys, they had settled their action and they were now out of the case.

However, the case is to proceed between the defendants to determine which of them is liable for the demolition of the property.

No details of the settlement were revealed open in court. Lawyers for the couple said the terms of the agreement is confidential. The defendants all deny they were negligent.

Limerick County Council and the NRA and the subcontractor have all served each other with notices of contribution and indemnity saying the other defendants were responsible for what happened.

In their defence, where negligence is denied by them, Limerick County Council and the NRA accept the house was wrongfully demolished, and the couple are entitled to compensation. The contractors in its denial rejects the property constituted a dwelling house or that it wrongfully demolished the O’Shaughnessys’ property.

Midland Fencing says it was told by the contractors to demolish a number of properties along the route of the N7, including the O’Shaughnessys, which it described as derelict, dilapidated, unfurnished and uninhabited.

The High Court heard the O’Shaughnessys bought the house for IR£34,500 from a woman who used it as a holiday home in 1998. The house suited their needs. They had lived there for a period and had also rented it out.

It was always their intention to reside there permanently. Between 2001 to 2003 there was uncertainty over the route of the new carriage.

The court heard other houses in Annaholy were acquired and demolished in order to construct the dual carriageway.

The O’Shaughnessys, whose property was close to the new road, were informed by the NRA in 2003 their home was not required in order to complete the project. The couple made plans to renovate and extend the property, and monies were borrowed. Those plans had to be revised.

In the months prior to the demolition, Brian O’Shaughnessy was carrying out extensive preparatory works as part of the renovations at the house. Planning permission was also sought from the local authority.

By late August 2006, slates on the roof had been removed and the furniture taken out. On the evening of September 6th 2006 Mary O’Shaughnessy decided to collect post at the house. When she arrived at Annaholty, the house was gone.

Initially she thought she was “at the wrong place.” When she realised what had happened to their home she became very upset. She said it felt likes she and her husband’s lives had been “wiped out”.

“I got such a shock. I froze really ” she said. “I just could not understand it”.

They had no prior indication or notice that the house was to be demolished. She said she initially believed matters would be sorted out by Christmas of that year, and never thought she would have to come to court. What had happened to her and her husband as a “nightmare”, she added.

They had been told a solicitor representing them Limerick County Council had offered an apology shortly after the demolition. However, despite doing everything they could to rectify their position nothing had been done.

Opening the case, Denis McDonald SC, appearing with Mr O’D Donnell BL for the O’Shaughnessys, said irrespective of the dispute between the defendants his clients had been treated with “callous disregard” since the house was demolished.

All they have received was two payments from Limerick County Council of €10,000 each. Counsel said that in addition to general damages the O’Shaughnessys were also entitled to exemplary damages.

Counsel said that because they had to rent properties they were unable to meet their mortgage repayments in respect of the house. In 2009 their lender sought possession orders in respect of the demolished property. Those proceeding have been stayed pending the outcome of the case, counsel added.