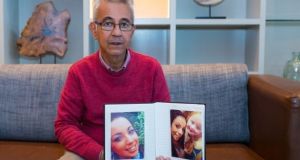 A High Court judge has approved a €1.5 million settlement, plus costs, over the death of a pregnant young mother as a result of failings in her care at Midland Regional Hospital, Mullingar.

Most of the settlement, some €1.3 million, will go to Natasha Perie’s two children, a girl now aged 11 and boy aged nine.

Ms Perie was aged 26 and almost 15 weeks pregnant when she was pronounced brain dead in late November 2014. She was kept on life support for almost another four weeks due to doctors concerns about the implications of the Eighth Amendment, since repealed, for the foetus.

The life support was ended after her family obtained High Court orders to that end on December 26th, 2014. Her father, Peter Perie later took proceedings in which the main claim was for damages for his two grandchildren over the loss of their mother’s care.

The children, who have different fathers, had been living with their mother in Mr Perie’s home but, since her death, were separated to live with their fathers.

The HSE admitted liability in the fatal dependency proceedings but disputed the extent of damages sought, some €3.2 million. The HSE defence was managed by the State Claims Agency which had offered some €1.5 million.

The larger fatal dependency hearing opened on Tuesday before Ms Justice Deirdre Murphy after a mediation failed to secure agreement and the €1.5 million offer ,made earlier this week, was not accepted.

The family had last November received an apology from the Mullingar hospital and the HSE over failings in Ms Perie’s care at the hospital in late 2014. She was pronounced brain-dead days after her admission but was then kept on life support due to the pregnancy.

Dr Frances Colreavy said Ms Perie’s face and body were very puffy and her eyes did not close properly. She said nurses told her the children, especially the then six-year-old girl, were upset, with both refusing to touch their mother. The girl was described as “inconsolable”.

Evidence was also given by a care expert who considered both children would require live-in nannies until they left home. The judge expressed reservations about that and certain other aspects of the claim.

Talks began between the sides on Thursday and, on Friday morning, Mr Justice Kevin Cross was asked by Jonathan Kilfeather SC, instructed by Gillian O’Connor solicitor, of Michael Boylan Litigation, to approve the €1.5 million offer.

Mr Kilfeather said the offer was now being recommended arising from evidence given during the hearing before Ms Justice Murphy and the judge’s views about some aspects of the claim.

He said the main planks of the claim concerned provision of live in nannies for both children and for alternative housing for them. Because of evidence including that Ms Perie had intended to move out of her father’s home after her third child was born, a lot of the case fell away, he said.

Due to misunderstandings, his side also only learned during the case that one father had given up work to look after the boy, along with another child, which also impacted on future care costs.

The offer was also being recommended because of views expressed by Ms Justice Murphy about aspects of the claim, including weekend care costs, which led to his side having formed a view as to what was likely to happen in the case and on any appeal.

Mr Justice Cross said it was a tragic case and he was being asked to approve a €1.5 million offer he had previously declined on the recommendation of the plaintiffs lawyers. Litigation is “not an exact science” and evidence, the courts assessment of that, and other circumstances can alter matters, he said.

As matters had unfolded, the €1.5 million settlement was a “very good”one and he had no hesitation approving it. He was told it includes some €808,750 for Ms Perie’s daughter, €508,750 for her son, some €50,000 each to their fathers for their past care over and above normal parental care, and a payment for Ms Perie’s father.

The judge, who extended his sympathy to the family, was told wardship applications are to be brought concerning the children.