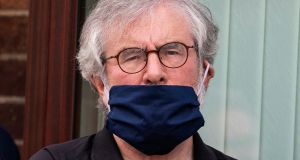 The High Court has ordered the BBC to provide more information to lawyers for former Sinn Féin leader Gerry Adams for his pending defamation action against the UK broadcaster.

He is suing the BBC claiming it defamed him when it falsely alleged he had sanctioned the killing of former SF official Denis Donaldson who worked for decades as a spy for the British.

The BBC denies defamation and says it can provide certain research materials it used in the making of the programme as part of the pre-trial preparation process but says other categories of court-discovery sought by him are too broad.

Mr Adams claimed the material provided to him so far was too vague and inadequate and he asked the High Court to rule on the matter. He also sought another order compelling the BBC to reply to certain questions put to the BBC by his legal team, a part of the pre-trial process known as a“notice for particulars”.

On Wednesday, Mr Justice Charles Meenan refused the order in relation to replies to particulars. He was satisfied Mr Adams had not established a basis for him to direct the defendant to do so.

However, in relation to material sought by him as part of pre-trial discovery, he directed the BBC to make discovery of seven categories of documents. There had been agreement between the parties in relation to three of those categories.

The judge said for ease of the parties he was directing the BBC must provide all documents evidencing and/or recording the circulation and extent of publication of both the programme and the article “within the jurisdiction of Ireland. ”

It must provide all documents evidencing and/or recording all editorial decisions bearing on the decision to publish the programme and article as well as documents created up until September 21st, 2016, related to research investigation analysis, inquiries, interviews, meetings and/or communications made for the publications.

It must also furnish all document created up until September 21st, 2016 comprising source material for the programme and, in particular, the claim that the IRA was responsible for the murder of Denis Donaldson and the allegation Mr Adams sanctioned the murder.

It must further provide all documents up until the same date evidencing attempts made to verify the allegations and in relation to efforts made to obtain and convey Mr Adams’ position before the publications were made.

The BBC must also provide all documents evidencing Mr Adams’ alleged involvement with the IRA and his alleged responsibility for IRA atrocities on which the BBC intends to rely.

In his action, Mr Adams says he suffered damage to his reputation as a result of what he says is the false allegation made by an anonymous source in the programme that he sanctioned the killing of Donaldson (55) who worked for Sinn Féin in Stormont but also was a spy for M15 for two decades.

Donaldson was shot dead at his isolated cottage near Glenties, Co Donegal in April 2006.

The anonymous source, referred to as “Martin” in the programme, said he (Martin) was also a paid State agent while a member of the IRA.

The BBC denies it was defamatory and claims the programme/publication was put out in good faith and during the course of discussion on a subject of public and vital interest. It constituted responsible journalism which was the result of careful investigation, it says.