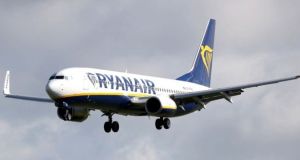 The court heard the captain of the Ryanair aircraft told gardaí there was a passenger on board intoxicated to such an extent that there was a fear she might endanger herself or others.

A drunken Ryanair passenger was in such a state that she thought she was still in Spain when arrested by gardaí on her return to Shannon airport from Alicante last month, a court has heard.

Ciara Bradshaw (38) of Sarsfield Avenue, St John’s, Garryowen, Limerick was before Ennis District Court on Wednesday where she pleaded guilty to two charges under the Air Navigation and Transport Act concerning her drunkenness and verbal abuse of staff and passengers on board the Ryanair flight on Saturday, August 17th.

Her solicitor John Casey told the court Ms Bradshaw is a nervous flyer and “a toxic mix” of consuming alcohol and prescription medication had resulted in her behaviour on the Shannon bound flight.

Mr Casey said he spoke to the arresting garda “and Ms Bradshaw was in such a state that she thought she was still in Spain, she didn’t realise that she was back in Ireland”.

In reply, Judge John King said: “What makes this worse than a general public order offence is that this happened in the aircraft cabin and there is nowhere for people to go.”

Mr Casey said he accepted this and told the judge that his client took Xanax and alcohol before getting on board “to alleviate her fear of flying”. This combined with alcohol was “a toxic mix”, he said.

Giving an outline of the facts, Sgt Aiden Lonergan said Ms Bradshaw, a single mother, had consumed her own alcohol, bottles of Bailey’s Irish Cream and Smirnoff vodka while she had also smoked a cigarette.

Sgt Lonergan said the captain of the aircraft told gardaí there was a passenger on board intoxicated to such an extent that there was a fear she might endanger herself or others.

He said Ms Bradshaw was abusive and insulting to flight staff and passengers causing considerable distress to all on board. She was arrested by gardaí at Shannon after the flight landed.

Her solicitor told the court she had no previous convictions. “She has worked all her life. She has good standing in the community and a very good job,” he said.

Mr Casey said that the Limerick factory worker “is deeply remorseful about this. It has caused great upset and embarrassment to her to be taken off the flight in front of hundreds of people. Nothing like this has ever happened her in her life”.

Ms Bradshaw wanted to apologise unreservedly to staff, gardaí and other passengers, he said.

The defendant told the court she had phoned the garda station the following day to apologise.

Judge King said he would give Ms Bradshaw the Probation Act if she paid €500 into the court poor box and said that she had escaped a conviction over her prior good behaviour and absence of any convictions.