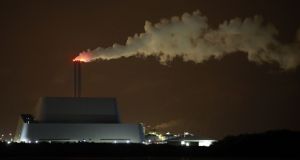 The operator of the Poolbeg incinerator has been fined €1,000 and ordered to pay €14,000 in costs after a “glitch” led to breaking its environmental protection licence during its first week.

The power plant at Pigeon House Road, Poolbeg, Dublin 4, which began operations in June last year, aims to converts waste that cannot be reused or recycled into clean energy to produce 60 megawatts of electricity, enough to power 80,000 homes.

It is run by the Dublin Waste to Energy project – a public private partnership between Dublin City Council and recycling and energy company Covanta.

Dublin Waste to Energy Ltd faced six counts of breaking conditions of a licence for the facility granted by the Environmental Protection Agency (EPA).

Summonses had been issued after which the case was first listed before Dublin District Court in November and had been adjourned until yesterday/today (mon) when a guilty plea was entered to three of the charges. The remaining three counts were dropped.

Solicitor Brendan Slattery, for the EPA, told Judge Flann Brennan the plant required and held a licence from the EPA. The charges related to events in June last year when the facility just commenced operation, he said.

He said the incineration plant was one of two of its type in Ireland and the court heard this was the first prosecution of its kind.

The operator pleaded guilty to failing to ensure on June 6th last that the incineration plant was operated in such a way that gas resulting from the process was raised at a temperature of 850 degrees Celsius.

There was also a guilty plea to a charge for failing to ensure an auxiliary burner was switched on automatically when the temperature fell below 850 degrees Celsius.

Dublin Waste to Energy also pleaded guilty that between June 1st and June 2nd last, both dates inclusive, it failed to ensure, in the event of an incident occurring at the facility, that the EPA was notified by 10am the following working day; and that it failed to notify in a format specified by the agency of any breach of one or more of the conditions of the licence.

The court heard Dublin Waste to Energy Ltd had no prior criminal convictions and there were no other prosecutions pending.

The charges were contrary to Section 8 and 86 (6) of the Environmental Protection Agency Act 1992.

Shane Murphy SC, for Dublin Waste to Energy Ltd, told the court it was caused by a “glitch” and happened in the plant’s first week in operation when testing was being carried out.

He asked the court to take into account the guilty plea, the lack of previous convictions as well as the fact that the facility had been under rigorous supervision and there was no evidence of environmental damage. “It is very much regretted on behalf of my client.”

The court heard the offences carried a fine of up to €4,000 per offence.

Judge Brennan said it was a “major factor” that no other prosecutions were “coming down the line”.

He also took into account Dublin Waste to Energy Ltd’s co-operation and that the incidents took place during a special period when the plant had just opened. The testing phase had to serve its purpose and seemed to have ensured compliance with the licence, he said.

He imposed a €1,000 on one charge while the other two counts were struck out and the judge also directed the defendant to pay €14,133 in prosecution costs.