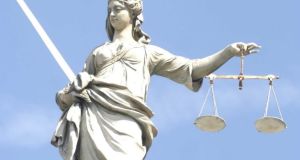 A judge on Monday suspended a five-month jail term for a “Holocaust denier”, describing the case as one of the most bizarre he had heard.

The sentence was for breaching section nine of the Firearms Act and section six of the Public Order Act. It arose from his lunchtime performance on January 23rd, 2015, when he put an axe through a TV in Ennis town centre.

Mulqueen told the court on Monday the performance art was to launch International Holocaust Hoax Day.

He said in September 2014, RTÉ had screened a documentary on the Holocaust and he complained to the broadcaster that the Nazis had sought a “territorial solution”. He said he turned his complaint into art. He said that not getting a performance permit was “a big mistake” .

The judge said: “What I find bewildering is that the accused thinks that the only offence is not to have got a permit to smash his own TV in public full stop and that history is being misrepresented.” He suspended the term for two years in view of no previous convictions.